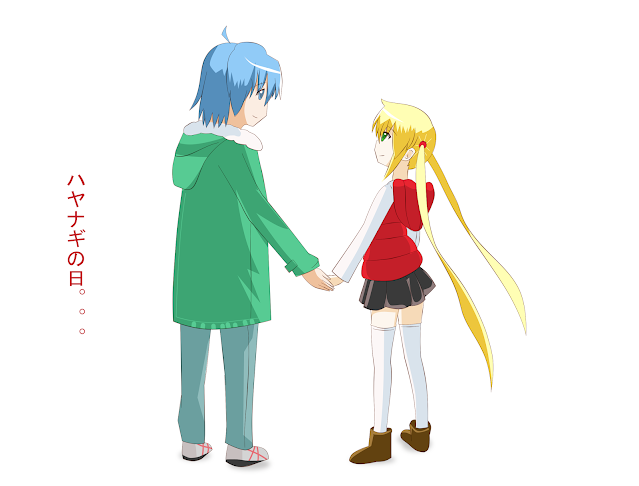 Today is ハヤナギの日 (HayaNagi day). They met on this day and their relationship began with a misunderstanding. Hayate wanting to kidnap Nagi for money because his good-for-nothing parents sold him to the Yakuza and eventually being grateful to her for giving him a job as her butler and Nagi thinking his kidnapping attempt was a confession of love and assuming for the longest time that he was madly in love with her when he always only saw her as a child and a master that he is eternally indebted to for 156 million yen as payment to the Yakuza. They met on this place called Loser Park on Christmas Eve

They would part on this very same day, one year later. The debt has been cleared, the misunderstanding had been settled with tears and now, Nagi is a little bit wiser, a little bit more independent, and decides to set him free to find happiness.

2 years later, Nagi, they would meet again on Loser Park on December 24th, Christmas Eve: the very same day when they first met. They greet each other, and Hayate declares that his feelings of wanting to protect her future has never changed over the past 2 years. And so, their hands intertwine and they walk off together. Nagi is no longer a billionaire heiress and Hayate is no longer boy in debt. This time, there are no misunderstandings. Surely, something has changed between them as well.

Posted by lordcloudx at 7:54 AM