The Martial Law Years: From A Person Who Actually Grew Up In The Time of Marcos 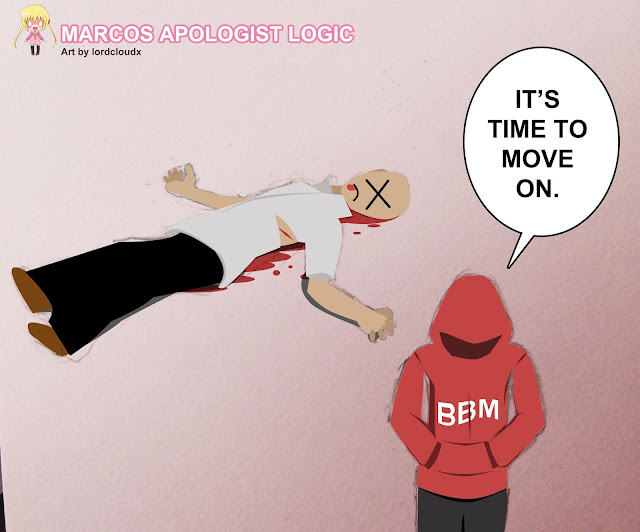 (My personal thanks to my only son, Cymark Ferdinand Mirasol for writing this personal account.)

Let me get one thing straight -- the Martial Law Years were miserable. This is coming from me – a person who literally grew up during the time of the late President Ferdinand Marcos; one of the most divisive personalities to ever grace the pages of Philippine History.

Ferdinand Marcos was very famous for his intelligence. In fact, he was as close as you could get to being a superhuman. He studied for the bar exams while incarcerated for a crime that he was eventually acquitted of – which he represented himself in as the legal defense. Most Filipinos at that time believed that he would be the best leader that we could ever have.

Thus, during his first term as the Philippine President, Filipinos in general idolized Marcos and of course, as a naïve elementary-schooler, I was no exception. Fortunately, Marcos definitely lived up to the hype – at least during his first few years as President. We were extremely satisfied because life was better. The Philippines was progressive and both my parents were always gushing about how amazing Marcos’ regime was.

Thus, as a child I considered Marcos to be the best President the Philippines ever had.

Because of his achievements, Marcos easily won a second term as President. It was near the end of this second term when life in the Philippines slowly began to take a downward spiral. I only heard it in faint murmurs at first. About how the “power couple” was held up on a pedestal all the time (Ferdinand and Imelda Marcos) and the seeds of discontent were slowly beginning to sprout in the hearts and minds of many Filipinos.

For my part, I was largely apathetic towards the political events in the country at that time, but that doesn’t mean I didn’t feel their effects at my level. I came from a poor family after all. I was enrolled in a public school and was the fifth child in a family of six siblings. Our Daddy was a government employee and my Mama was an elementary public school teacher, but they barely made enough to support such a large family.

Remember, all of these things happened BEFORE the declaration of martial law. Now, as to the events leading to the infamous “Dekada 70” if you have spent any amount of time surfing through the political posts in Philippine social media, I don’t think you need a history lesson – whatever you’ve seen/read there that can be verified with actual historical data is true. Indeed, martial law was declared to quell an apparent communist threat coming from the New People’s Army (NPA). Of course, we weren’t naïve at this time. Even without any easy means of rapid communication like we have now, rumors and speculations spread quickly among the general populace and most people accepted that it was all a ploy for Marcos to perpetuate his power for a third and possibly, a lifetime term.

I was already in 1st Year College when Martial Law was officially declared – and contrary to what historical revisionists would like you to think – life back then was far from the paradise that young people who’ve never lived through those times like to imagine it to be.

Daddy quickly organized a family meeting and gathered all of us siblings together in order to brief us on what to expect. We were specifically instructed that: Now, we are no longer free. Never speak out against the government and never join any groups that might even be slightly anti-government. A curfew is in place so you need to be home one hour before the curfew and never go to any places where a riot or some anti-government protest might break out. If you get caught outside during the curfew you will be placed in the “stockade.” This was a temporary form of incarceration with dire consequences depending on your situation. Furthermore, we were told never to utter a single word that might sound anti-government even when talking with friends, teachers and especially with random strangers. The government had eyes and ears everywhere.

Basically, we felt like were walking on tiptoes all the time. Freedom felt extremely suppressed. You literally could not do anything that you wanted for fear of being caught by the police. Even among friends in school, no one ever spoke of political events – yet, everyone was silently aware of the abuses that were already taking place.

You had it the worst if you were a woman and you somehow found yourself in the stockade – especially if you were suspected of being an activist, you would be placed on top of a block of ice and violated repeatedly. I heard this from my brother. He was a government employee and the DILG building was right next to the “stockade.” If they wanted to interrogate you, they used “shock therapy” in order to get you to talk.  Of course, even if you weren’t an activist, who would stop some perverted person in authority from having his way with you if you were his type?

Thus, curfew time was curfew time; lights out completely inside all houses for fear of being randomly investigated by the police on suspicion of subversive activities. If you wanted to talk, you did it in small whispers – but we mostly just slept until dawn.

It wasn’t like the lockdowns during this pandemic wherein some thick-headed individuals could still be found drinking, playing cards, or even just mindlessly loitering around in the parks. If you violated the curfew, you were immediately arrested, “stockaded” and sometimes, you just disappeared completely. This was the fate of several people from my own neighborhood.

Remember, you could be summarily arrested and executed on mere suspicion. No trials necessary.

On the flip side, crime rate was almost zero. No one dared to commit even the slightest legal violation.

There were generally no cars around during curfew and almost zero activity outside. If a car passed by our house and suddenly stopped, I felt a sudden stab in my heart.

Everyone lived in constant fear of that fateful knock on the door. Even the radio stations avoided all political discussions completely.

However, after about a year of living this way, things began to change. People started talking and became less and less afraid. Demonstrations and protests became the norm – even though the police were still actively arresting and summarily executing suspected activists in a process known as “salvage.”

I think I have a good idea why it was called “salvage.” You know how things that float down the river or the sea are “salvaged?” That was the fate of your corpse if you were somehow marked as a suspicious individual. This wasn’t an imaginary event. These salvages actually happened and were reported regularly on the radio.

Speaking of the radio, as well as the newspapers, the only things they ever reported was who was killed that day – usually by the police. Sound familiar? Good thing we have social media nowadays.

If it wasn’t about morbid things, then it was all about Imelda’s latest social escapades. Fountains of free-flowing wine in Malacanang, and guest celebrities from Hollywood and other famous personalities abroad. The food and decorations were generally all freshly airlifted from abroad as well.

Pro-government propaganda was also rampant in the media. The radio commentators regularly sang praises about the latest buildings and roads constructed by the administration.

Fortunately, we still had music for entertainment, at least.

I was an AB Political Science Student back then, and it was during the later years of the Martial Law era when our own teachers began openly speaking out about the abuses of the Marcos Administration. Mind you, these were ordinary people. They weren’t necessarily socialists, communists, nor even slightly associated with the NPA. We took up books such as “Today’s Revolution: Democracy” and “The New Society” all Pro-Marcos texts, but taken up with criticism by our own Political Science profesors.

People in general were full of discontent and sick of the censorship and constant government interference with their daily lives… and yet, we all felt helpless.

Remember, one “red delicious apple” cost anywhere between 50 to 75 pesos a piece. Adjusted for inflation, that’s 1241.80 pesos each. (Using a Philippine Inflation Calculator). You couldn’t find these things on the sidewalks – only local fruits in season such as mangoes, bananas and lanzones.

There were no imported chocolates either. The government controlled the flow of goods and services with an iron fist. Our suspicion was that Imelda didn’t want the ordinary Filipinos to be able to taste and experience the things that she had. After all, this was a woman who would go shopping in the most expensive stores in the US and have it closed for the day especially for her own personal use.

However, during the final years of Martial Law, international intervention and constant critical propaganda from middle-class and well-off Filipinos who were just as disgruntled with Marcos’ dictatorship as everyone else had forced the regime to become a lot more lenient.

We weren’t afraid anymore and even though the threat of abuses from the police was still a constant, people were more outspoken and defiant. Long before the Edsa revolution, people had already set themselves free from Marcos’ reign – the death of Ninoy Aquino merely sealed the deal. No matter what historical revisionists may want you to believe – for someone like me who lived through these times, this was the tipping point for years of suppression to finally come to an end.

Personally, I swore that if any Marcos would ever run for any position in government, I would never vote for this person. I made a vow, and so did many of my Political Science classmates. The sins of the father ARE the sins of the son and the grandson and the great grandson and everyone else who flows down from this monster’s lineage. 20 years of living in fear can do that to you. Unlike some people, I don’t have a short term memory.

Posted by lordcloudx at 6:38 AM