In all honesty, I didn't think this final day would be worth blogging, but as it turned out, it actually was. So here I am again with the final chapter of this year's trip to Manila.

We started the day by cooking the last of the bacon and eggs that we'd bought at the start of the trip, as well as finishing off our supply of bread. Check out was at 12:00 PM, so we decided to make the best use of our room and come down by around 11:00-11:30 AM.

My aunt and cousin arrived at our hotel room by around 8:00 AM. My cousin would be coming home to Iloilo on the same plane as us, while my aunt had to leave to make it back to work by 1:00 PM.

By 11:00, we'd finished packing up everything and we were ready to check out. Things went pretty smoothly and we left our heavy luggage at the hotel reception. We'd be coming by to pick them up by around 4:00 PM. The hotel was near the airport and we had plenty of time to explore Manila a little bit more before our 7:35 PM flight.

We walked straight through The LandMark mall and into Glorietta wherein my mother bought some megamelt ensaymadas as a "pasalubong" (sort of gift/souvenir for the people back home).

Since I was a bit antsy from being prevented from buying Miku's book yesterday, this time, we also went straight to the toy store where I'd bought some of Nagi's clothes before and I bought another Barbie (whose fate is sealed) and my mother bought me one more set of clothes for Nagi. I like this series of Barbie Dolls. They're just the same height as my Nagi doll (around 24-25 cm, so a bit shorter than the standard barbies at about 28-30 cm). 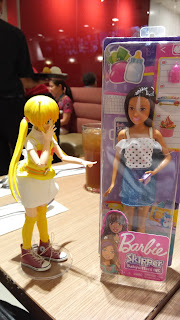 After that, we made our way to one of the Glorietta mall's many exits and booked a Grab Car to the Power Plant mall nearby.

We arrived at the mall at about 12:20 PM. We had a nice lunch at Kenny Rogers Roasters -- and by the way, for the people in Iloilo City, they have better tasting coleslaw here for some reason. The cabbage is finely chopped instead of the larger chunks that they use in SM City Iloilo's Kenny Rogers branch.

After lunch, my mother walked around the clothing stores at the 2nd floor of the mall, while my cousin and I went straight to Fully Booked. I scored this Light Novel: I Want To Eat Your Pancreas -- which comes highly recommended by my sister (actually she was looking for it about 2 years ago) 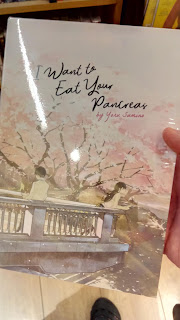 We just took a walk around the entirety of the mall after this. I saw a place where they were selling 1/4 to 1/2 scale superhero/heroine figures... meh, Nagi is 1000x cuter -- as you can see. 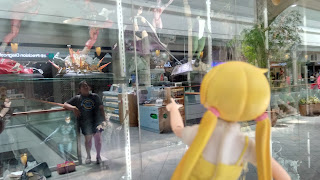 Having toured the entire mall (Power Plant is fairly small -- smaller than most Iloilo City malls, but it's packed with stores. Great use of floor space), we went back to our hotel to unload our purchases a bit.

We still had plenty of time since it was only 2:00 PM by the time we arrived at the hotel, so we took a short walk back to Glorietta again. This time around, there was someone called "The Piano Man: Martin Avila" -- and upon research, he's apparently, been a premier lounge pianist for 3 decades. He was extremely impressive so my mother stopped by to clap for him and I took a video just to show you... hopefully, the audio quality will be ok. Also, the little girl trying to get him to say hi to her was pretty funny, if a bit bratty.


Our legs were getting tired after this, so we went around a bit looking for some mini cheese cakes and we were about to go to Kumori, when I spotted this coffee shop that sold boxes of 6 mini cheese cakes for only 300-350 php -- which is a far cry from the 1000-1300 php per half-dozen boxes that Kumori sells. My mother bought a box for us and then we made our way back to the hotel to pick up our luggage.

We booked a large car to take us to the NAIA Terminal 3. It was a short drive since we took the skyway (with a 35 php toll) to get there. After checking in our heavy luggage, we went inside Terminal 3's mini mall. (Yup, malls are a huge thing here in the Philippines -- both literally and figuratively.)

After looking around a bit, we settled down for dinner at a local restaurant called Max's. The food was great -- and actually not too extravagantly priced for a diner that's located inside the airport.

With dinner out of the way, we were off to the pre-departure area. So to top things off, the last thing I did before leaving Manila was to draw the cover for my black paper drawing album. Naturally, it's Nagi. I also noticed I had an audience of a few kids watching me. My mother told me that their parents had pointed at me earlier so the kids could watch... I actually enjoy having an audience as I paint/draw. Anyway, I finished the cover before our plane was ready for departure. 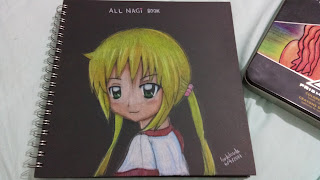 The plane left at about 7:40 PM. During the flight, we experienced some mild turbulence during the plane's ascent and descent because of the stormy weather. It was actually a bit scary at one point, but at least the cabin lights didn't involuntarily go out like it did during this one flight I was in with my sister some years ago. I suppose it was a good experience for my cousin who was taking only her second airplane ride -- a nice, stable flight on the way to Manila, and a bumpy ride on the way home.

So for my final thoughts -- this trip was very nice over-all, although a bit disappointing at times, but that's just how things ago. It was a nice eye-opener however, because it made me realize a few things about my life as well and what kind of direction I should be trying to take.

And with this, my Manila trip for 2019 is officially over. In the end, I actually managed to buy a few more things for myself -- which is enough to satisfy me. Thanks for reading through the entire experience with me. I'll see you next time in future travel posts to come. For now, this is lordcloudx out.
Posted by lordcloudx at 10:08 AM