Today was a bit more laid back than the previous ones. We started off with some light breakfast inside our rooms and then went straight to the pool by 8:00 AM.

Miraculously, through youtube tutorials and some coaching from my friend, Roop (online), I'm now able to swim freestyle while breathing normally in and out of water. Anyway, Prince Plaza II's pool is kinda small, so I can actually swim the entire length of it in 3-5 strokes.

After about 15 minutes, the pool got pretty crowded with people, so my mother decided to come out. We made our way back to our hotel room by about 9:10 so she could make it to the 10:30 AM Holy Mass at the Ayala Chapel, which was literally just in our hotel's backyard. Of course, I managed to take several nice pics of Nagi in her bikini before we left. 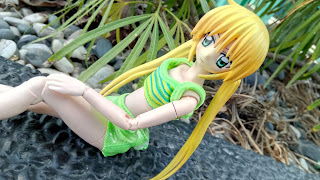 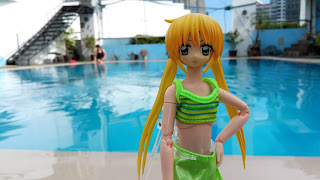 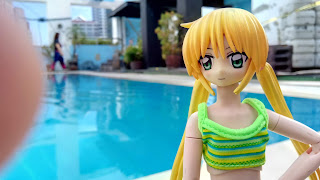 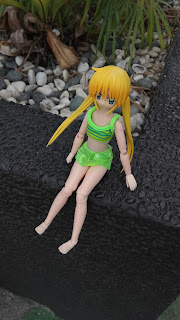 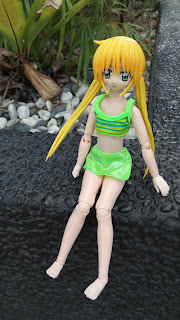 I took my mother to the chapel and she told me to go ahead and shop around the malls for a while and we'd meet up in an hour. In case you didn't know, I'm an atheist and my mother respects this.

I made my way to the Glorietta mall and my first priority was to buy some black paper at the Fully Booked store there. I bought a black paper sketchpad about 12x12" for 580 php. I also saw a manga called "All You Need Is Kill," an entire compilation in one. Unfortunately, I don't have the luxury of being able to buy all the things I want for now, so I decided to give that a skip since I can easily read all kinds of manga anytime anyway online.

After that, I wanted to buy something for Nagi as well and I just randomly went inside a toy store nearby and I saw they had several Barbie Dresses in stock. In the end, I went for a full Barbie Doll because her dress looked like it would really suit Nagi. There were actually two dolls that had some nice dresses and I couldn't decide, so I took Nagi out and asked the store attendant which dress she thought would suit her better -- she chose this one. Nice choice. Pink really does suit her better. The other dress was a blue denim skirt with a white top. 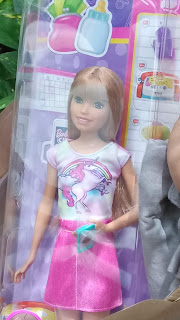 Well... you know the fate of this doll -- better prepare yourself Barbie, Nagi's going to strip you soon. This doll cost 799 php -- which is about the cost of an ordinary 1/6 scale doll outfit -- so it's a good buy. Also, I can give away the doll as a gift (with a hand-me down from Nagi, of course).

Next, I went to National Bookstore to buy a plastic envelope for my art portfolio and then I made my way back to the chapel to meet up with my mother. We walked around a bit to find a place to eat and ended up settling inside of the Old Spaghetti House inside the mall. The food was great -- and again, pretty reasonably priced. Also, my mother was still a bit hungry after the meal -- quite surprising considering how little she usually eats.

We finished lunch by 1:00 PM and of course, my mother gets her usual Senior Citizen's discount.

Oh, and Nagi is wearing a new outfit for lunch too. 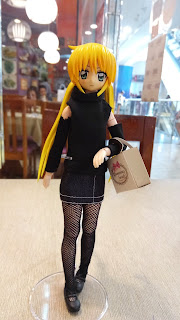 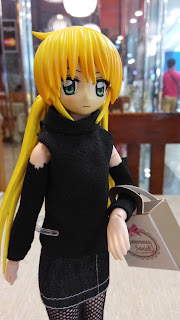 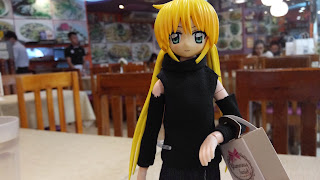 We walked over to the adjacent SM Ayala mall after lunch wherein my mother bought a few things for herself and for a friend, then we walked back to the hotel. We stopped by to buy some snacks along the way first.

At the hotel, we actually managed to get a little bit of sleep until 4:00 PM. A friend was coming over to pick us up and treat us somewhere by 5:00 PM.

Greg arrived at exactly 5:00 PM sharp and he brought some gifts for the both of us -- which was really nice of him. We took a grab car to Bonifacio High Street inside some new mall where people were lining up (it seems they'd been there for hours according to Greg) to try out the burgers from Shake Shack. Apparently, it's the new big thing in burgers here for some reason. Greg had some connections and was able to expedite the waiting time via a proxy. He told my mother and I to take a walk inside the mall for a while -- which was really great because I managed to score another new outfit for Nagi at Hamley's. The mall had a Michael Kors branch too -- and according to my sister, this is a horrible brand :D. 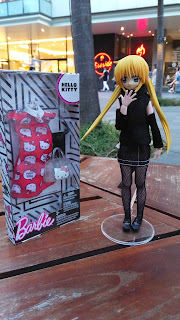 After finishing our burgers (my mother had a hot dog), we took a little walk around Bonifacio High Street. I thought the place looked pretty familiar -- and I was right, this is the place that connects to Serendra and eventually, just across Market Market. As for the burger, I'd say it tastes a lot like Burger King, but the tomatoes and lettuce are a lot fresher and it's lighter on the dressing -- which is a good thing. It wasn't very heavy on the stomach, but still satisfying.

Since we were in the Serendra area, I decided to pay a visit to Fully Booked and it's a good thing I did because I was finally able to buy some half pans of Titanium White watercolors there. Daler Rowney Aquafine with a lightfastness rating of 3 stars -- pretty good. It's about on par with White Nights.

I also saw a Hatsune Mix manga, but again, no manga for me unless it's really rare since I have to watch my spending for a while until I can find a stable source of income or go back to school --- depending on what I decide eventually.

After that, we tried taking some group selfies with the three of us together, but it wasn't working out with the bad lighting. Since it was getting a bit late, we took a grab car back to the Greenbelt area near our hotel and had dinner at Peri Peri Chicken. The food was great, but honestly, I was a bit full from the burger earlier so I was barely able to finish my meal. We asked the waitress to take our group pic there too. 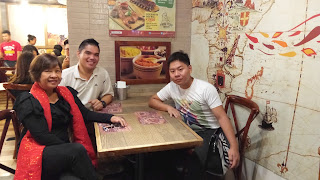 With dinner done, we walked back to the Hotel and then said goodbye and thank you to Greg.

It was a pretty laid back day over-all, but I managed to buy quite a few things for myself and Greg is always a very accommodating host and a nice guy in general.

Since we were back at the hotel a bit earlier than usual, I had plenty of time to paint, so I finished this piece -- my piece from our Manila vacation, "The Avocado Harvest" in Kuretake Gansai Tambi watercolors. This concludes my day 3 entry. See you tomorrow for our final night here in Manila.

One observation I'd like to share is that the way you speak English seems to be a way of defining your social status here in Manila. If you speak English in a particular way, people can immediately discern whether you were educated in a prestigious university or if you're basically poor. Of course, learning English at an early age and acquiring a native speaker's accent is not that hard anymore since everyone has access to the internet nowadays, but it's really become endemic to our culture to judge people from the way they speak English. It's a detestable attitude, but it is what we do here in general. Hopefully, things will change in the near future as Filipinos learn to become more of global citizens rather than being stuck in their own tiny bubbles of existence. 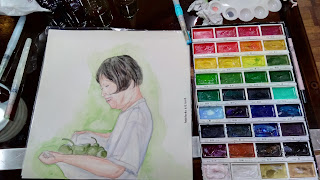 Posted by lordcloudx at 8:29 AM