Since we bought some groceries yesterday, we had a light breakfast inside of our hotel room. After that, we got prepared and booked a car to take us straight to Manila Ocean Park where we met up with my aunt and cousin.

The Ocean Park is actually just one big building with lots of nature-centric attractions. This trip was my Aunt's treat and she bought everyone unlimited tickets for the entire day.

The Ocean Park is actually relatively small, but they hold shows at staggered times within the different areas of the building to keep you busy throughout the day. Also, there are several commercial stalls selling all kinds of goods and services as well as a few snack stands and restaurants scattered throughout the building.

We started out by going through the creepy crawlies section that features all kinds of lizards, snakes, amphibians and exotic insects inside of glass cases. I managed to take some nice pics with Nagi inside this section. 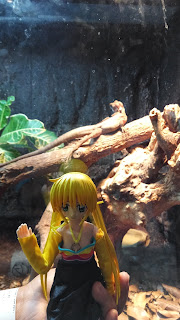 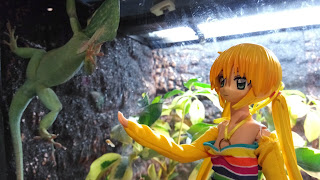 After we were done with this room, we went to the Oeanarium that featured all kinds of fish and sharks. The most impressive portion of this attraction for me was the 180 degree transparent tunnel that allowed us to see the sharks and rays from their underwater artificial habitat. I found it quite amusing because you can actually get all kinds of impressive pictures like this one: 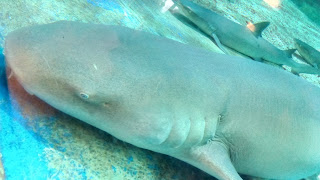 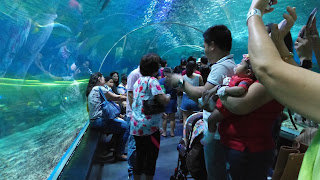 Upon exiting the oceanarium, we went outside of the main Ocean Park building to see the Sea Lion show. Although it was hellishly hot outside, there was a canopy cover for the guests seated at the grandstand and the two sea lions were quite impressive and well-trained. It was something that would have probably held more fascination for me as a kid, but still, it was worth watching. 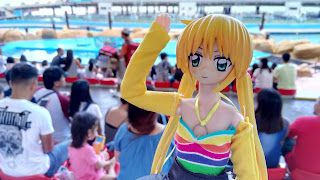 We exited the attraction and made our way to the main building after the show. I forgot to mention this earlier, but since the floor space of Ocean Park is relatively small and it was a Saturday, the place was packed with people -- also, it was Cebu Pacific's (a local airline) family day for their employees and they were celebrating it inside of the park.

Anyway, once we got back inside, we had some lunch inside one of the packed restaurants and then went to the birds of prey area wherein the guests could freely interact with the raptors which were kept inside of the park. The birds didn't seem likely to attack humans and they were prevented from going completely outside of their area via nets that formed a very large dome over their enclosure. No Nagi pics here because there's no way I'm risking one of those birds snatching her up. If any of these birds weren't endangered enough before, I might just make them go extinct entirely... :)

This area also led outside, which was perfect because we went back to the area where they held the Sea Lion show to watch a bird show. This show wasn't quite as impressive and was frankly a bit embarrassing for the trainers since some of the macaws outright refused to play any of the games or got visibly frustrated when they couldn't solve some of the puzzles that their trainers were coaxing them to play. The raptors looked very impressive as they flew across the audience however.

When we got outside after the show, there was a man selling some flying mechanical bird/glider hybrid that actually flapped its wings outside. I've seen these before. They work like wind-up helicopters. I asked him how much it cost and the Ocean Park security guard saw this and immediately chased him away. Apparently, he wasn't allowed to sell here -- and of course, the Park management are well within their rights to refuse such vendors -- however, looking at the obviously destitute looking vendor, it just led me to think that this is one of the reasons why communist ideology is seeing a big revival among compassionate intellectuals nowadays. I personally don't believe in it, but there are times when capitalism just appears to be the incarnation of evil -- this was one of those times. I tried looking for the man later on, but he was nowhere to be found. I planned to buy at least two his wares from him even though I only wanted one -- and all because I saw how harsh the guard had treated him.

This incident made me think that attractions like the ocean park come with a cost, and I don't mean monetary. Where is the humanity in this situation exactly? I know the guard was just doing his job, but the demeanor with which he carried out his duties felt downright inhuman.

Anyway, with that disheartening experience aside, the next portion of the trip was pretty nice. We went to this barnyard area wherein they kept bunnies and rodents -- but the fun part was the top floor where there were all kinds of small colored birds that you could interact with. I think they were lovebirds. The attendant there told us that we could feed them with birdseed, but it wasn't even necessary. The birds perched on our arms and even our phones. One blue-colored bird got so comfortable on my mother's hand that it outright refused to leave even when we were all set to leave the area. I managed to coax it to my hand and leave it on a tree branch eventually. Also, a careless woman did a quick 365 degree twirl with the birds all around her for no good reason and stepped on and visibly crippled a yellow bird -- sigh, people can be such animals with their ways. 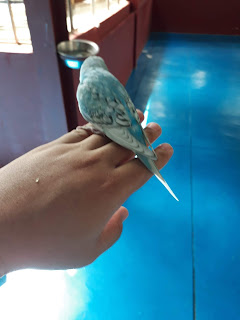 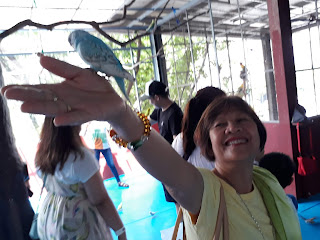 Next, it was back inside the building and this time, we took a trip to the Superhero toy collectibles area. This place featured DC superheroes quite heavily. There was one room dedicated entirely to Superman toys. Naturally, I had to make Nagi strike a pose with them... also, she's cuter and prettier than Supergirl -- also sexier. 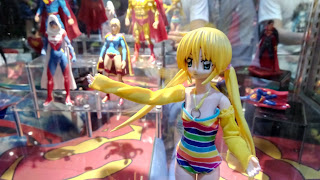 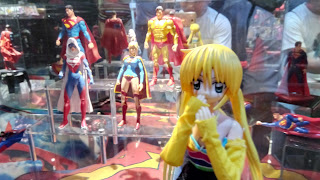 After this, we just sort of wandered around the other attractions we hadn't been to yet except for the premium ones such as the underwater diving which wasn't covered by our unlimited tickets. There was an area where we could see where they bred the marine life they kept in the park and an area where they kept some penguins -- many of which were bred in captivity.

We were done with the park by about 3:00 PM, so we booked a car to take us to SM Mall of Asia. My cousin was looking for a particular store -- and I was amused to find out when finally found said store that it actually had a branch inside of SM Megamall -- the place we went to last night. Anyway, I bought a Miku keychain... not that well made, but it's Miku anyway. I was also wearing my Miku sword throne shirt today -- so it's quite apt. This keychain only cost 70 php. 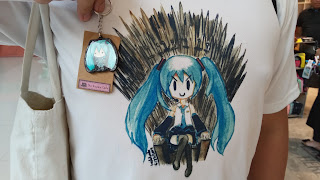 Our next stop was at the S'Maison wing of the SM Mall of Asia -- we went there because it's a nice secluded area that not a lot of people go to/know about because it's connected to the SMX Convention Center and the high-end Conrad hotel. My cousin and I went straight to the Fully Booked store over there while my mother and aunt decided to go to the public lounge area to rest up. I was pondering about what I should buy for myself this vacation inside of the store and I've decided that it's going to be one set of medium-sized black paper (great for pastels and colored pencils) and/or a new waterbrush set, and of course, one doll dress/clothing set for Nagi. 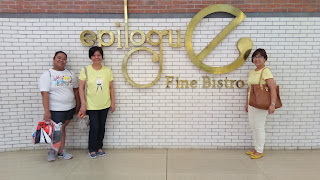 My cousin bought some books for herself and then we went to meet up with my mother and aunt downstairs at the lounge area. We still had time so we decided to take a trip to the Venice Grand Canal mall since my cousin said she wanted to go to a place that's great for pictures. This place is excellent for pictures. Here are my best pics with Nagi :). 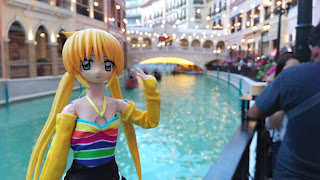 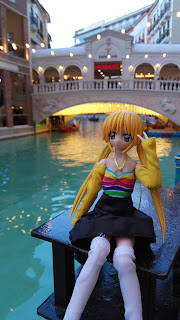 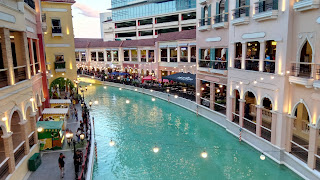 After a brief walk and some picture-taking time, we had some lunch inside a restaurant that my mother chose for us and they actually had a reasonably priced menu for a restaurant in this area. The food was great -- especially the garden salad they served with some custom dressing, lettuce, red beets, croutons, and chicken.

We took a short walk towards Dairy Queen for dessert. We had some fun watching the men working out at the Gold's Gym at the top of the building across us. I was also pretty amused at this really well-muscled looking guy who couldn't do a single pull up even though he tried several times. (I can do 10 in good form and I'm not even that sculpted -- challenge me here and I'll upload a video and show you :P)'

This was the last stop for us for the day and we all went home afterwards. I have to say, this was a very colorful, if a bit exhausting day. There were quite a few ups and downs here and there, but one thing I'm grateful for on this vacation trip is that I'm currently unemployed and therefore, I'm actually not actively thinking of any work backlog -- which I had to do in all of our previous vacation trips from the last few years. I'll need to think about what I want to do going forward after this vacation trip, but for now, I'm quite satisfied with life.

Also, I started this sketch on a 12x12" watercolor painting this night just before I wrote this blog. I hope/expect to finish it before this trip is done. It's called: "The Avocado Harvest." Anyway, I need to turn in for the day. We're going swimming tomorrow and meeting a friend. I also need to buy my souvenirs tomorrow since we're already leaving by Tuesday. Anway, see you for tomorrow's blog. 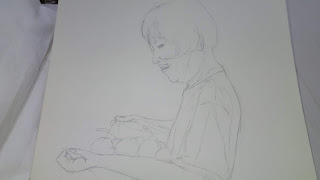 Posted by lordcloudx at 8:58 AM