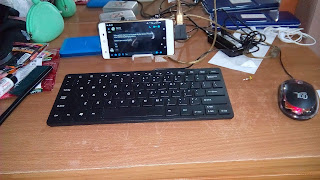 Hey there! lordcloudx here typing from my phone turned pseudo laptop. Just in case you're confused, check out the pic of my setup on top. Basically, I connected a USB otg converter into a USB hub and then connected my mouse, portable HDD, and keyboard to it.

Anyway, back to the trip. As you may know if you follow my travel blogs, I take a trip with my mother to Manila every year at around this time. Our flight was pretty early. We left Iloilo at about 5:55 AM and arrived in Manila 30 minutes early. It was a very smooth flight and even my cousin who was taking her first plane ride wasn't shaken -- although she did admit to being surprised by the initial speed during takeoff. (I'm sure it gets to everyone at first).

I passed the time during the flight by watching a few episodes of Tate no Yuusha and the latest ep of One Punch Man S2. After claiming our checked in baggage without a hitch, we simply booked a grab car (works like UBER) to our hotel in Makati. We stayed at the same hotel last year. The building is kinda old, but you can't beat the facilities they offer in the room for the price. Aside from the usual TV, Aircon, WiFi, there's also a full-sized refrigerator, an electric stove and a microwave (remind me to take a pic of it tomorrow.) 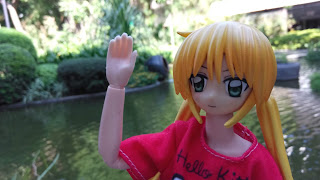 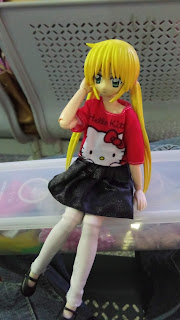 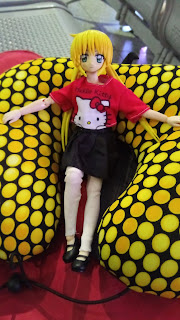 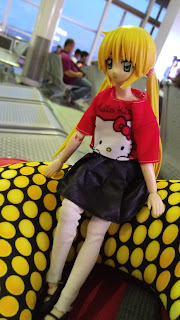 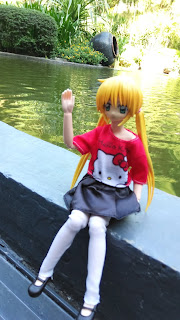 However, we couldn't check in until 2:00 PM, and it was only 7:00 AM. We had a lot of time to kill, so we just left our heavy luggage at the hotel lobby and wandered around the Ayala Circle for a bit until the malls opened at 10:00. I managed to get a few good pics of Nagi at this point.

We were already pretty tired by the time the malls opened. We entered The LandMark mall first in order to get into Glorietta. My cousin is into books and as for me, my main agenda was to find some acrylic and/or watercolor titanium whites to replenish my supplies. We went to find the Fully-Booked (a local bookstore that sells art supplies and other stuff too) branch inside of Glorietta. By the way, if you're familiar with the place, the food court is currently closed for renovations.

After a brief visit to Fully-Booked, I couldn't find my titanium whites and my cousin couldn't find whatever she was looking for so we decided to head for National Bookstore. Btw, in case you didn't know, the Ayala Center consists of several malls all connected by an overpass called The Link: Greenbelt, The Landmark (a department store mall), Glorietta, and SM Ayala.

On the way to National Book Store, some people wanted to give my mother a free sample of some beauty products called Origani even though she asserted that she wouldn't be buying. In any case, they really liked her and gave her several samples on her skin and a mini-soap to take with her anyway.

At National Book Store, I was quite surprised to see the sheer amount of art supplies they carried that we didn't have back in Iloilo City. I found a mini tube of acrylic titanium white, still missing my watercolor whites, but I bought it for 89 PHP (Sakura).

After that, we were all hungry, so we went to the SM Ayala food court next to the supermarket for some quick lunch. It was some Chinese place we chose -- good food, reasonable prices. We then bought some groceries since we decided that we'd be cooking breakfast inside the hotel. My cousin would be staying with my aunt who lives here in Manila. My Aunt would pick her up after lunch though, so she was staying with us until then.

After grocery shopping was over, we took the long walk back to our hotel to check in. We were all pretty tired at this point. After receiving the keys to our room, I took the opportunity to shower and get some rest. My aunt arrived a few minutes later and we decided to just rest up a bit in the room and then go mall hopping again to SM Megamall wherein I'd finally get to try out ice skating for the first time. It's something I wanted to try since last year. Actually, I was pretty confident since I know how to use in-line skates/roller blades and I've heard they're almost the same.

We left for Megamall at about 4:00 PM, but it was hard to book a car there. Also, the travel time was atrocious at over an hour. Anyway, we got there at about 6:00 and I saw that the new Mega D building had an Art Bar (artist shop) branch. It was there that I finally got my titanium white watercolors (Mission Gold). Also, there was this totally obnoxious guy in there who was looking at the open sketch area and said in a totally arrogant tone to his female companion, "look at these tryhards showing their art." This is the kind of guy that deserves a bullet to the head immediately. He looked like a total wananbe artist too. Goatee, beard, long hair... and a really tryhard American Accent.

Anyway, after that, it was time to go ice skating. Actually, I think i did pretty well for a first timer. It felt a little bit more slippery than roller blades at first, but eventually, I got used to it -- unfortunately, my cousin who never skated before took a mild tumble. Anyway, nothing serious.

When we both decided that we'd had enough, my mother and aunt were nowhere to be found -- and they had our phones with them... fortunately (or so I thought) I brought an extra phone, but it had no sim card. I could still connect to mall wifi and call them though -- but it seems my mother didn't think that it was me calling because she was positive that I left my phone with her.

After waiting for about an hour, they finally came back and we had dinner, but not before I discovered that my mother totally flubbed up taking a video of my first ice skating session.

Here's a video of me skating.

I actually had to come back to the skating rink after dinner for this video because my mother shot the first one and she had no idea how to use my phone. My cousin took this clip. As you can see, I'm a bit cautious, but yeah, I can get by.

After that, it was time to go home. We were all quite exhausted -- especially my mother and aunt.

That concludes day 1 of our trip. We're going to Ocean Park tomorrow and I've never been there before. It should be good. Also, Nagi will be wearing a swimsut with pants or shorts, I think.

Posted by lordcloudx at 8:25 AM