The Tale of The Prince's Bride Chapter 4: The Kindness of Strangers


Six days had passed as the prince followed the trail of the golden fireflies. There was no end to the path in sight. So much so, that he was starting to believe that the girl had lied. Before long, it was already the sixth night.
“This is probably a wild goose chase. I’m being taken for a ride.”

He thought of how much he loved his would-be bride. The princess clad in black attire whom he had fallen in love with at first sight.
Suddenly, on the road ahead, he saw a man lying down… was he perhaps dead?
There was a girl in a thick black cloak by his side. She was ever so slight that the prince missed her form at first sight.
“Hunger is indeed quite a burden to bear, but stranger, you’ll live if you’ll just take a bite from this pear.”

“Thank you, dear lady. You are indeed generous and kind. I think I can manage, but this fruit is expensive. Are you sure you don’t mind?”
“It was the last of my food for the road ahead, but I’m glad to part with it if it means you don’t end up dead.”

At this point, the beautiful prince had heard enough. He approached the kind lady for it was his turn to speak up. He reached into his satchel and…
“I’m truly touched by your sweetness, oh lady so kind. Won’t you please take these sweet treats and some wine? For your travels, I mean… that is, if you don’t mind.”
“Uh… oh-“ Underneath her cloak, the little lady hid behind.

“Thank you, then I’ll take them and I’m sorry that I can’t stay, but I must hasten and be on my way.”
In his heart, the prince would really have desired, for the kind little lady to stay for a while. With that said, he knew that he too had to go forth and ride. And continue his quest for his elusive kidnapped bride.
On and on he galloped on his steed of black stripes and pure white; chasing the trail of the golden fireflies.
Before long he had finally arrived. At the entrance to the Forest of Lies – although it was not much of an entrance all entangled with vines.

Meanwhile, at the castle on the hill past the forest of lies. Some chatter was going on between the witch and the princess in black attire.

“Pardon me, miss witch, but might I inquire as to the cause of your mischievous smile?”
“W-what do you mean? Where do you see a smile? I’m just quite amused with the prince you so desire.”
“Ara, but let me correct you there, I do not see him as an object of desire.”

“Eh? What do you mean?” Said the witch quite surprised, “Didn’t I abduct you from him on your wedding night?”

“True, I was to wed him on that night, but don’t misunderstand. It’s not like I would tremble if he held my hand.”

“So why would you allow him to become your husband?”
At the witch’s innocence, the princess smiled.
“I was simply bored out of my mind. We met just hours before and he said it was love at first sight.”

“But… you never loved him from the start?”

“If I did, then right now we wouldn’t be apart.”
The princess’ eyes had a mischievous spark.
“You must have had a really boring life – to agree so readily to be a stranger’s wife.”
“Indeed, I was. So bored, I could have died. But the prince, I wonder what  his so-called love… is truly right.”
At the Princess’ musings, the young witch smiled.

“We shall see soon enough, Princess in black attire. He has finally reached the forest of lies. The path ahead will be filled with trials…”

The princess looked into the young witch’s eyes.

“Ah I see… now I understand what it is you truly desire.”

I like how this one turned out. This is a hand-sized card and painted with Bento Picasso watercolors. I've been playing Mobile Legends Bang Bang (lol at that "Bang Bang") lately, so you might see Nagi in Layla cosplay next week. 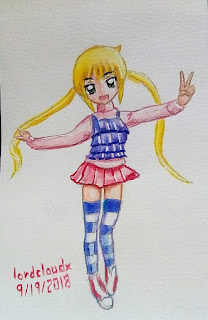