The Tale of the Prince's Bride Chapter 2: Love At First Sight

The beautiful prince traveled to the lands beyond. On and on he rode on his steed of black slashes and pure white.  Before long, he came upon a palace, or perhaps more accurately, a mansion of grand design.
The place seemed abandoned, so he dismounted and carefully set the rusty iron gates aside. Perhaps the garden had a well for both he and his horse were thirsty and somewhat tired.
He went around the building and circled to the right side, from there, he saw a well but something else filled his sight.
It was a maiden of golden hair in a royal robe of the blackest of attires. His heart skipped a beat as their eyes met for the first time.
“Oh my, who might you be? What a curiosity to find such a fine lady in this lonely royal mansion of mine.”
“You’re mistaken, milady. Ahem,” the prince sighed as he stifled a look annoyance that even his pretty face could not hide, “with my admittedly feminine face aside. I assure you that I am a man – and a prince, nonetheless, who has fallen in love with you – at first sight.”

“Ara-ara,” the beautiful lady responded with a mischievous smile.

“That is quite interesting, this love at first sight. Might it be some kind of affliction? How may I help you with this plight?”
“Will you marry me?” The prince replied. For he was certain such a fine lady clad in pure-black attire, had to be a princess and was more than fit to be his bride.

“Hmm… you amuse me, so certainly, let’s get married tonight!”
The journey to the black princess’s kingdom took them quite a while – and because this is a lore in medieval style, naturally, some bandits had stalked them and blocked their path with sly smiles.
There were five of them and each with a dagger – surrounding the couple from all sides. The prince dismounted as his bangs covered his eyes.

“Stay put, milady. He said with his usual kind smile.”

The black princess stared back at him with a look of surprise. This was the first time after all, she had seen his winsome smile.
“Now then, ladies, hand over all your goods and while you’re at it, leave the horse behind.”

“Hey boss, I like the fair-haired one with the beautiful face, but I really can’t resist the buxom one in the black attire,” said another bandit as he ogled the couple with lust in his eyes.
And of course, this remark had pushed the prince over the edge. With a kick, and a punch, and even a poke to the eye, without drawing his sword, he let his fists and feet fly.

Ah yes, I forgot to tell you didn’t I? Actually, the prince can take care of himself in a fight with his feminine looks and charm aside. What is more, he was quite filled with rage at being mistaken for a girl all the time.
And soon the prince and the princess rode away, leaving five half-dead bandits in quite a state of disarray.
At the kingdom of the princess with black attire, the beautiful prince was accepted and well-liked. The kingdom had been ruled by the princess all alone for quite a while, due to an unfortunate accident that killed her parents in a fire.
“Well, my prince. As promised, we shall get married tonight… but this journey has actually left me quite tired, so if you’ll excuse me, to my bedchamber I shall retire. Oh, and the guest room is on the door to the right.”
“Hah, not so fast! You princess with obnoxious breasts and black attire! You’re coming with me right now. Dare to refuse and you shall invoke my ire!” Said a loud, high-pitched voice, which came from a figure of small stature wearing a hood of thin animal hide.
“Ara… an intruder has crept inside? And what of my guards, do tell me child.”

“C-c-child? I’ll have you know I’m a powerful witch with powers that will blow your mind! As for the guards, why not draw your curtains and see for yourself.” Said the witch with a glint in her eye and her witchy face concealed in her hood of animal hide.
“Indeed, my guards are on the floor – all dead.”
“N-no! I didn’t kill them. There’s no blood as you can see! I ran in-between them and they just tripped over their feet and clashed with their heads.”
“Ara-ara… such powers, you possess. So why have you come here? Pray tell, do confess.”
“Hehe~ you don’t seem to know very much, so I will tell right now. I have come here to kidnap you, oh princess of black attire.”

“W-why!? I can’t tell you that… let’s just say that it’s to fulfill my wish – my greatest desire.”
“Oh my, how sinister, oh powerful witch with powers that blow my mind. Well come then, let us descend together. My carriage will take us and leave my prince far behind.”

At this point, the prince finally spoke a line.

“Wait! Don’t I get a say in this, oh princess of mine? We were supposed to get married tonight!”
“Ara… we were going to do that. You’re right. But as you can see, I’m a bit preoccupied. This witch has powers beyond my mind. I am powerless to stop her rampage – so my prince. I’m afraid I must leave you behind.”
The princess uttered this with an amused smile.
The prince sank to his knees cursing his own helplessness from the inside, as the princess, his would be-bride, casually walked away leaving him behind.   With that, the princess and the witch slowly disappeared from his sight – but not without turning back to wave bye-bye.
“See you next time, prince.” The witch said with her high-pitched voice like that of a child.

“At the castle on the hill past the Forest of Lies.”

Greetings! To break it up a bit, I might do a regular Hayate Reflections next week instead of continuing this tale. In any case, see you next week for sure. 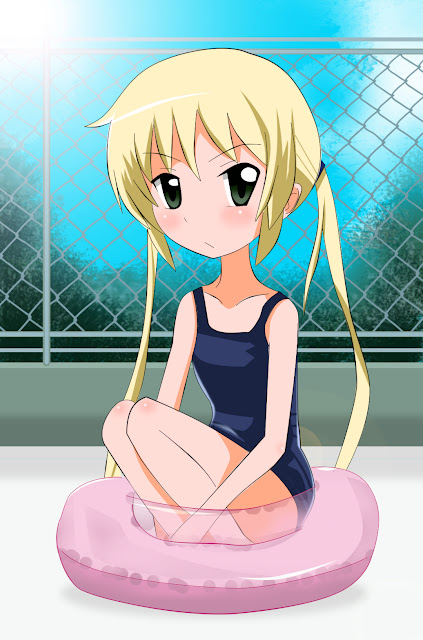