The Tale of The Prince's Bride Chapter 1: The Prince With A Beautiful Face

The Tale Of the Prince’s Bride

Chapter 1: The Prince With A Beautiful Face

Come now my friends and let us travel back in time – a little bit forward, or perhaps a step backward, whichever it may be. Witness with me, a tale of jealousy, pride, despair and conflict – and without bridging the gender gap that many people so desire, it nonetheless challenges the meaning of what is love and what is right.
Long ago and far away, in a place forgotten by history, there lived a prince with a face that was neither quite handsome nor even particularly manly, but rather more of destitute and quite womanly. Nevertheless, with his casual kindness, which was well-known to all his subjects and even in the lands beyond; the young prince won the hearts of all; man, woman, and child alike.
It goes without saying then, that the beautiful prince had many admirers who vied for his heart; again, man, woman, and child alike. Indeed, his charm was such, that age and gender did not matter, because all were attracted to his feminine face and his kind and giving heart.
When the prince reached the age of 16, his father, the king told him that it was customary for him to find a bride. While most royal families would hold a ball to help a prince find a potential bride, because their kingdom was a small one and the nobility were few and far between – there were really no eligible brides. Thus, the beautiful prince set off to ride to the lands beyond and perchance find himself a lovely bride.
As the prince rode through the village on his curious steed, with black slashes stained on its fur of pure white, people from all walks of life came to greet the beautiful prince that they so admired. There were many parting gifts showered upon the road – they were flowers of all kinds – roses of red, yellow and gold, white azaleas, and even asters, all of which were symbols of love in their own right.
And as the prince finally arrived at the gates that led to the outside, a hooded figure suddenly leapt in from the side.

Obviously taken aback, the prince almost, but did not quite succumb to fright, but of course, he greeted the stranger with his usual smile so kind.
“What is it, uh… dear child?”

He asked perplexed, as the rather short stranger brashly removed her cloak of thin animal hide. She was a curious one with the stature of a woman, but the height and face of a child.
“H-here? Won’t you take this with you? For good luck, my prince so fine.”
It was a single daffodil of yellow and white.
“Little girl, that flower is such a common kind. Why would you think it worthy for the prince so fine?” Said someone from the crowd, which prompted everyone to laugh with their mouths open wide.
“Hush…” The prince commanded.
He closed his eyes for a moment, waiting for the noise to subside.
He clasped the flower close to his heart and then took out a purple book from the satchel hanging on his side. Carefully, he pressed the daffodil to one of the pages and closed it tight.

“Thank you for this gift. I’ll cherish it for as long as I live, my dear child.”
“Y-y-you’re welcome! And… you’re not that much older than me, so DON’T CALL ME A CHILD!”
The young girl screamed quite loudly as she ran off while covering her face with her cloak of thin animal hide.

Well... as you can see (from the illustrations of the characters) this is still Hayate-related. Anyway, here's the fanart for the week. See you next week for sure. 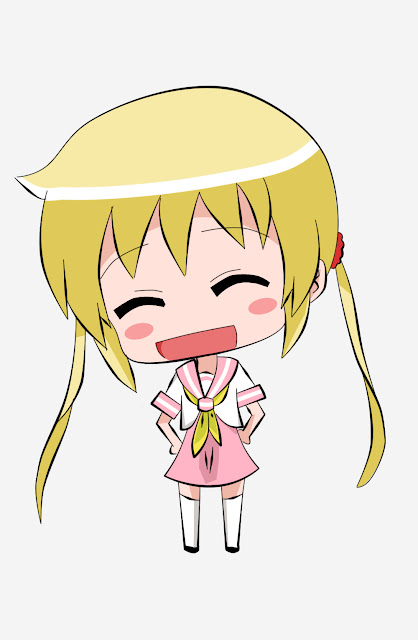