Lordcloudx here again and this week, we’re picking up right where we left off and discussing Nagi’s character development. So let’s get right down to it.

Beating Maria and not being afraid of the dark anymore

The next stage of Nagi’s character development came in the closing moments of the level 5 arc in chapter 515. At this point, Maria had gotten into the act and it culminates into a roulette battle between Nagi and Maria. This was a pretty iconic moment for Nagi. It marked the first time that she had ever beaten Maria in any game – since one of Maria’s quirks is that she’s basically invincible at games. Secondly, Nagi won without relying on Hayate or any other outside factors except the traits she was born with – an amazing intellect and even more amazing luck, which she was well aware of.

Needless to say, both Hayate and Maria were shocked by her victory. It is at this point wherein  her two pseudo guardians would disagree in their assessment of her. Maria notes how she has been sleeping on her own without being afraid of the dark for a while, but Hayate, in total denial says that nothing about her has really changed. At this point, Hayate is conflicted because he is probably well-aware of Nagi’s rapid development, but at the same time, he wants to retain the status quo.

Next, we move on to the climax of Nagi’s development in chapter 561 and onwards.  And of course, this was the point when Nagi found out that Hayate never confessed to her all along and it leads to an explosion of negative emotions from her that was strong enough to open the path to the royal garden.

It’s also worth noting that delusional Nagi haters thought her ship had sunk at this point because Hayate had nooo romantic feelings for her. How did that turn out for you?

Ahem… anyway, her character development seemed to have taken a step back here since she wished for a world where Hayate loves her and thus, the royal power granted her wish by sending her into an illusory world where she could live with a fake Hayate and Maria forever.

Of course, her redemption wouldn’t take too long. Near the end of the manga, Hayate manages to convince her that the time that they spent together wasn’t a lie even if he hadn’t noticed her feelings for him. This continues on into chapter 567 when Nagi’s character development reaches its true climax. It is here that Nagi gives up her inheritance to Hisui and then subsequently sets Hayate free, choosing to live on her own and become the woman that she had always aspired to be. Hayate stares at her with a lovestruck look on her face – which is easy to confirm if you will visit Hata’s blog – but if you’re in denial, then that’s too bad.. for you.

Also, let me take this moment to say that… of course Hisui was ok with just leaving and not causing any more harm after everything that’s happened. Nagi gave the inheritance to her. She got what she wanted. Furthermore, no matter how violent and greedy she was portrayed to be, Hisui never once tried to directly harm Nagi nor did she ever show that she hated her childhood friend.

And of course with that, there’s nothing left to do except to confirm Nagi’s character development – and this is adequately done when we see her two years later as a 16 year-old. Able to take care of herself in all aspects and most importantly – being stalked by Hayate for the last two years until she finally calls him out to confess to her for a happy, lovey-dovey ending.

Just a painting of Nagi in casual clothes this time. Reference was some Korean model, I think. Used White Nights watercolors for this one. 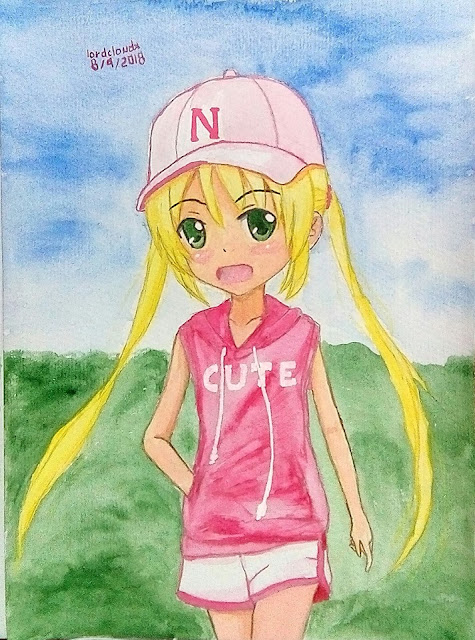