Greetings, lordcloudx here and this week, I'd like to talk about an often-understated portion of Hayate no Gotoku and of course, this would be Nagi's character development.  I mean, sure, it’s pretty much in-your-face if you were paying attention throughout the series, but I say that it’s understated because people often purposely ignore her character development to talk about the imaginary romantic developments they perceive with Hayate and all the other girls in his harem except for Nagi.

Now let me get this straight. I’m fairly certain that Nagi’s character development was always a work-in-progress that actually culminated in the penultimate chapter of the manga, but in my opinion, there were several key chapters that really highlighted her character development and of course, taking on a part time job was one of the first triggers.

At this point in the story, Nagi had just decided to burn a winning ticket for some small-time prize that Hayate had won. She was wondering why Hayate was so upset about it. Therefore, a little bit later, she asked Hayate what he would like for a birthday present and when Hayate said that he’d like a watch if it was from her so that he could always keep it with him, she decided to take on a part time job at the Café where Hayate and Hina work – Café Donguri. This triggers an episode wherein she totally shows up Ayumu when it’s shown that they’re both clueless about working in a café but that Nagi actually learns pretty fast.

It may not have seemed like much, but this was one of the first times that we were shown a more competent side of Nagi – even if it was played off for laughs.

Chapter 252 needs no introduction, but for non-manga readers, I’ll do it anyway. This was the turning point for Nagi’s character development, basically. It was during this time when Nagi broke the King’s Jewel for Hayate’s sake. Her grandfather Mikado had said that the stone should be protected at all costs because it was the proof of her inheritance. On the other hand, Hayate had been informed by Nagi’s friend Isumi that his childhood sweetheart, Athena, needed the stone to be broken in order to be freed from the curse of King Midas. As you can imagine, Hayate was put into quite a predicament.

He had to choose between saving the woman that he arguably loves and the girl who became his savior at the lowest moment of his life. Of course, while Hayate was agonizing over the decision he had to make – Nagi made that decision for him by breaking the king’s jewel herself and therefore, putting Hayate out of his misery. In effect, she actually gave up her inheritance just to see him happy – but wait, here’s the best part: Nagi was totally unaware of just how serious the matter was for Hayate since she had no clue about the curse of King Midas nor of Athena’s case.

She broke the stone only because she saw that it was something that was troubling Hayate – in short, she did it out of a pure and honest love for him – however you may choose to label this love – platonic, romantic, whatever.
Writing Her Own Manga

The next stage of Nagi’s character development came in the mangaka arc. As you all know, she and Ruka were competing in a self-imposed doujin competition here with Hayate at stake. If Ruka won, Nagi would set Hayate free from his debt and allow him to marry Ruka. On the other hand, if Nagi won, then the status quo would stay and Ruka would continue being a pop idol and not bother her about Hayate again.

In the end, beyond the matter of who actually won the competition, the entire point of this arc was simply to show Nagi accomplishing a personal victory of her own – writing a manga from the heart and selling it herself despite having her manuscript almost destroyed just a few days before the due date of the competition.

Nearing the end of the manga now, the next phase of Nagi’s character development happened in the Level 5 arc in chapter 510. It was during this time when Nagi began to reflect on her feelings for Hayate and about how her feelings of love were closely connected with the debt that he had with her at that time.

What she said at that time was: “I didn’t fall in love with him because he said he loved me. There must be times when someone falls in love with someone else upon first laying eyes on them.  Hayate, a lot has happened since I met you. They were busy and turbulent times, but they were still happy times. Is that why? Once that happiness became commonplace and the liveliness grew normal… I found I wasn’t sure of something. I didn’t know why you were by my side. Was it because you loved me? Or… was it because of your debt? Unlike formless love, solid numbers are powerful. At some point, those solid numbers had bound the two of us and become a strong support for my heart. But if not for that… Hayate, would you still stay by my side? Can I still believe in that formless bond? Hayate, my feelings for you have not changed.”

And then it stops as the alarm clock wakes her up… anyway, in this chapter we can see the reaffirmation and growth of Nagi’s love for Hayate. Yes, it may have started as a simple crush, but at this point in the story, surely, those feelings have blossomed into love – not yet reciprocal at this point… but now we all know what happens in the future.

She didn’t know it at that time, but it was also in this chapter when Hayate would permanently pay off his debt of 150 million yen to her – while still choosing to remain as her butler.

Anyway, this video is getting a bit too long, so I’m going to cut it up into two parts. This has been Hayate Reflectons and I will see you next week for part 2 of my personal analysis of Nagi’s character development. This is lordcloudx out.

Hata-sensei noticed me again this week~ 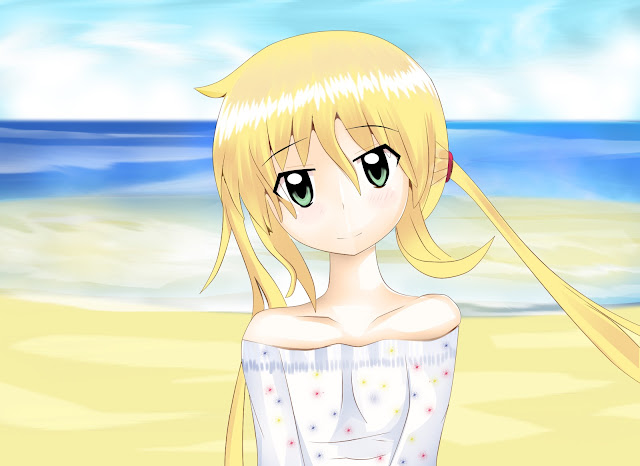