Hayate Reflections: What Nagi's Victory Meant For Me


The world is empty… shallow… devoid of depth… would be my perspective right now if one thing had not happened on April 12, 2017 in our time – and of course, this would be Nagi Sanzenin’s total victory. Not only in securing the so-called Hayate bowl and being actually the one whom Hayate chose to be his true romantic partner at the end of the series. Certainly, it’s an open-ended type of ending with nothing really concrete said, but the implication is strong and quite clear – so let’s not argue about that. If you don’t like it, you’ve lost so stay salty forever~

But hey, I’m not here to talk about how salty you should be today. Today, I want to talk about what Nagi’s victory meant personally for me – and that’s just what we’re going to do.

So first of all, let’s talk a little bit about me. I believe that the best way that I can describe myself would be – an empty shell of a person. I am basically someone with no big dreams and no strong desires in life – and as such, I am also someone who does not fear death. That’s right, I’m not afraid of dying. Of course, I’m not suicidal and I don’t want anyone to kill me – that is a different story altogether. What I mean to say is that if I learned of my impending unavoidable death, such as perhaps through a terminal illness of some sort, then I wouldn’t really care that much about it. Certainly, it would force me to think about a few things and what I should do with the rest of my time in existence, but well… it’s really not something that I fear nor even a thought that really saddens. If there is one word that would describe me – it would be apathetic. Basically, I just don’t care.

Of course, I wasn’t always like this – and if you feel that you are like me, I’m certain that at one point, you weren’t always like this as well. This is my story.
Back when I first started working, I had a pretty meager entry-level salary (and I still do right now), but what I earned was more than enough to support myself. Over the course of just two years, I’d actually saved up a considerable amount of money and my savings just kept growing. This was a real morale booster for me since I started working just after I failed the Philippine Bar Exams.  The justices who checked my papers gave me a 71 and a 72 respectively on two questions which were pegged as “a test of English skills.” Naturally, I realized that the bar exams was total BS right away after this and I lost any desire to try again.

In any case, something happened around 5-6 years ago, which was neither my doing nor within anything I could control. As a result, it led to me partially shouldering a very small percentage of a debt that was never my own. Still, even if it was a small percentage, one unexpected expense led to the other and before I knew it, my personal savings had dwindled down to the price of a Nintendo Switch – and I have been struggling to keep it just a fraction above that level ever since. Now if I wanted to, I could probably get a second job and raise my income a bit – at the expense of my leisure time. However, since I’m still alive right now and still without any personal debts of my own, I have chosen not to. I mean, after all, the original problem wasn’t mine. Why should I have to work an extra job or two for it?

It was probably this event that caused me to lose my taste for life. Over the years, I have become jaded and apathetic and I really don’t see my personal situation improving or degrading in the near future – and as long as the status quo is maintained, I’ve given up any long-term plans. There was a time when I thought I could make my first million (worth about the price of a new entry-level car in my area for context) within five years – of course, this much is no longer possible.
Partially, this is why I turned to escapism. It was around 2013 when I discovered that I could really empathize a lot with Nagi Sanzenin in Hayate no Gotoku! It was around this time when the mangaka arc was wrapping up and the things that Nagi were experiencing really felt similar to my own experiences.

In the long-run Chiharu’s interference for Nagi’s sake turned out to be for the best. Still, when I saw how high-handed she was in allowing Nagi to suffer for the purposes of her own growth, it left a bitter taste in my mouth. I have personally had several experiences myself with such types of people who think they know better and who insist that you must suffer in order to grow as a person. Who knows? Perhaps those people were correct as well, but I know one thing is for sure, unlike Chiharu who was actually looking out for Nagi after all, these people were only feeding their own egos by advising someone whom they believe is below them – it’s just human nature, really.

Nagi’s greatest fear was always that she would be left alone and that Maria and Hayate would leave her one day. While this did come true eventually, she was more than well-equipped at that time to handle it.

However, during the mangaka arc, she was also left  alone to fend for herself in a way. During the mangaka contest, Chiharu prevented Maria from consoling her when she had all but given up. She felt desperate because she was running into one roadblock after another and Ruka was threatening to take Hayate away from her.
The worst part is that Hayate, clueless as ever, chose this time to ask for permission from Nagi to be together with Ruka and to help her out with her own problems. Think about it, the person you love is asking for your permission to be with someone else during one of the lowest most desperate points of your life. I’m pretty sure that this would be enough to cause severe emotional trauma even for a fully-grown adult – but remember that Nagi was just barely 13 and a half years old when this happened to her.
I felt a great empathy towards Nagi and her plight– and it was most definitely around this time that I really started to fall in love with her character. In hindsight, I was probably projecting a lot of my own experiences onto her – which is quite different from a lot of people who say that they can relate a lot with Hayate. This is probably also the reason why I am a Nagi shipper. At the end of the day, it is Nagi who resonates the most with me as a character and therefore, it is only natural that I would wish for her happiness – together with Hayate.

She Handled It Beautifully

And yet, despite being pushed  to desperation and actually suffering several emotional breakdowns in the process, Nagi did not give in to the desperation. She kept pushing on and despite having lost basically everything considering the super billionaire lifestyle she was living before, she persevered and finally achieved something of her own – which was to create a manga that people actually liked to read. I won’t say that she won an actual victory over Ruka, who actually allowed her to take the win, but I will say that what opened Ruka’s eyes to allow Nagi to win would be Nagi’s moral victory over Ruka. Unlike Ruka, Nagi was doing it for herself and for the right reasons. Despite having Hayate in the back of her mind as well, when it was time to start selling her manga at the convention, she was genuinely enjoying herself and she had actually written a story straight from the heart. In short, she had poured her soul into the task of drawing and selling her manga.

And of course, this was really the turning point for Nagi. This was really the part of the manga when she had actually “won” as an individual, as a character, as a truly worthy co-main heroine and romantic partner for Hayate.

While there were still many subplots to wrap up and a lot more drama to unfold between the butler and mistress pair, it was at this point when for her part, Nagi had achieved victory.

What It Means For Me

Nagi’s victory meant everything to me. At a point in my life when I was merely an empty shell of a person, I found someone whose experiences connected to me on a deeply emotional and I would say even spiritual level. As someone who views himself as a person who has basically lost at life with no dreams of his own, I found solace in watching someone else claim the type of victory that life had denied me.

Now I understand that the internet is a crazy place and of course, some clueless, insensitive individual will eventually read this and be like “ho hum, what a bunch of melodrama over nothing,” but just know that everything I said here comes sincerely from the heart.
This is lordcloudx and this has been Hayate Reflections. See you next week!

Testing out different watercolor sets this week. Two are from Student Grade sets (Bento Picasso and Sakura Koi) and one is an artist grade set (White Nights).  All of these were painted on a 4x6" piece of watercolor paper. 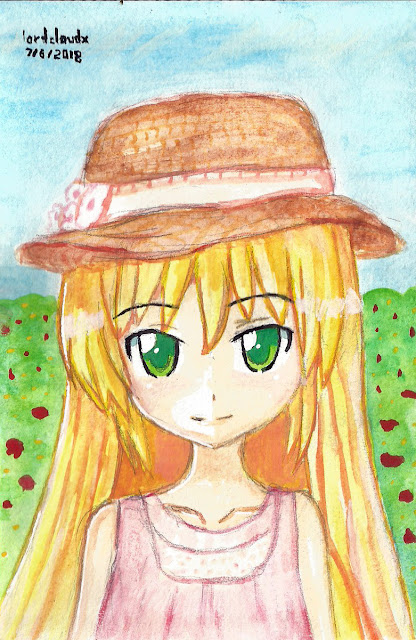 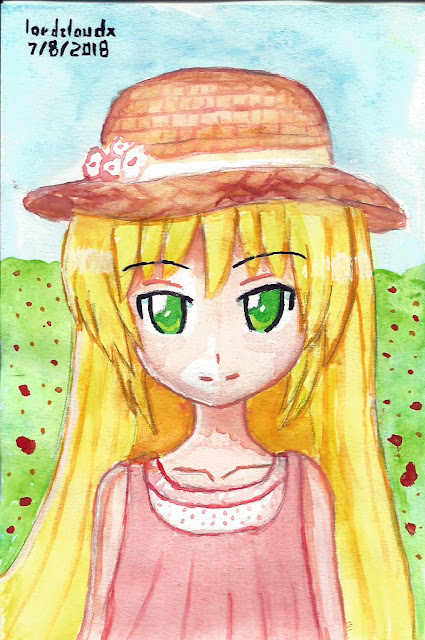 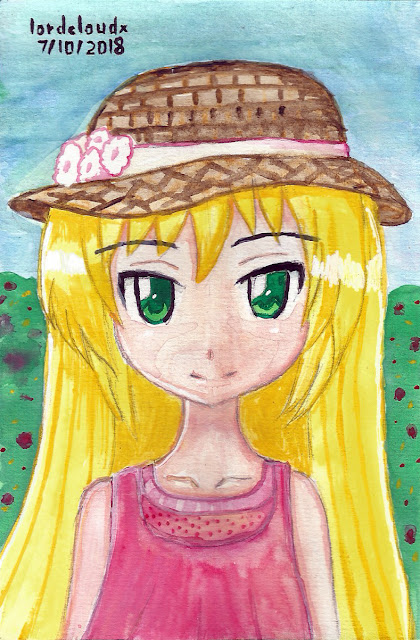 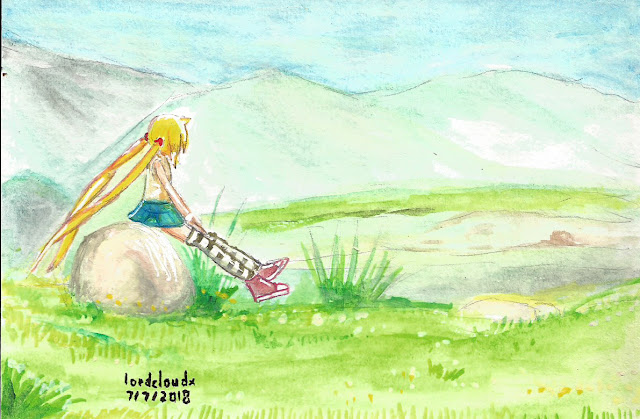