Today, let us talk about a topic of monumental importance for all women – and men as well, to some extent, I suppose.
And of course, that topic would be: how to avoid rape. Naturally, we’ll be using Nagi Sanzenin – specifically, 16 year-old Nagi from the end of the series as an example. Anyway, let’s keep it short and sweet today and get right on it. 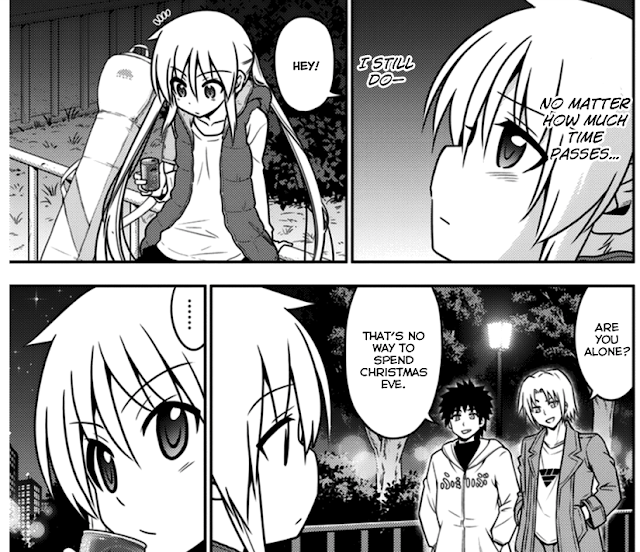 Just in case you didn’t realize it yet, this will be a spoiler for the final chapter, but if you’re watching this video then you probably don’t even need this warning in the first place – thus, we continue.

So the scenario here is that it’s Christmas Eve and Nagi is by herself in Loser Park thinking about who else? Hayate, of course. She’s reflecting on her personal growth and how far she’s come without him in the past two years.

Suddenly, two men with obviously ill intentions approach her. Now it might be a bit of stretch to say that these two goofballs were thinking of raping her, but they were definitely up to no good.

Anyway, one of them tries to grab her by the arm and then…
This happens. 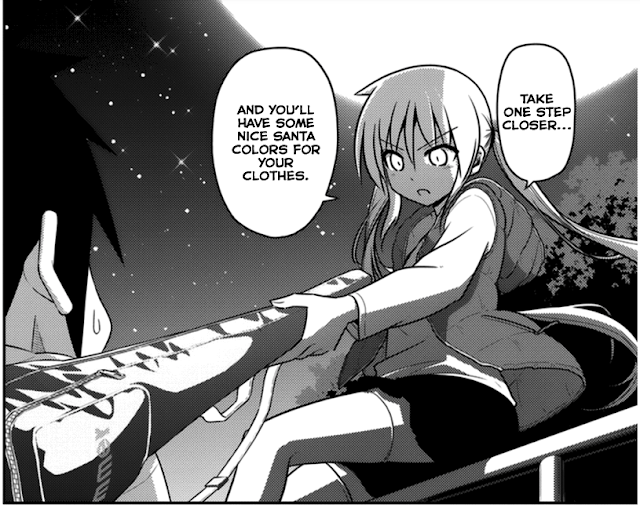 There, attempted rape averted – or at least she preempted whatever it was they were planning to do. These two turned out to be a bunch of cowards after all, but in any case, despite wearing a short skirt and being in a rather isolated place at night, she managed to fend off some would-be attackers. So just how did she do it?

Well, first of all, she had a weapon handy – which would be her Lacrosse Stick inside its case. Just to give you an idea, according to Wikipedia, modern Lacrosse sticks have shafts made of hollow metal such as titanium, scandium, aluminum, or alloys. Now some of these metals are known to be notoriously soft, but given the shape of the stick, it’s still potent enough to be wielded as a makeshift weapon – especially someone unarmed. Anyway, the point here is that she had something right by her side that she could use as a weapon. 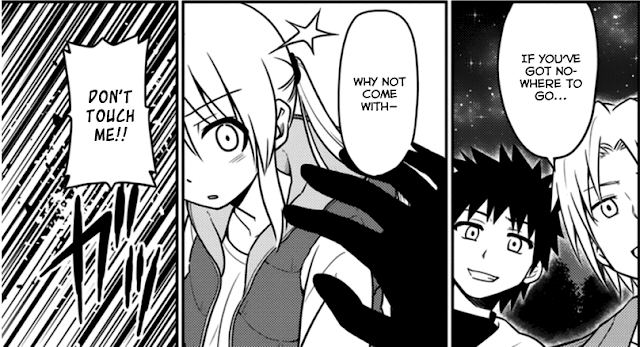 The second point here would be assertion. Nagi took the initiative once she observed that things were getting out of hand. She immediately took action as soon as one of the men who had approached her invaded her personal space and got too close. She did two things: First of all, she shouted in a loud, assertive voice and commanded them not to touch her. Secondly, she immediately took hold of her weapon and aimed it at her would-be attacker’s neck with every intention to use it – as you can see in this panel… also, beautiful, isn’t she?

But What If The Men Were More Aggressive?

Yes, indeed. What if the men had been more aggressive? Would Nagi’s weapon and her own skill with it have been sufficient enough to ensure that she isn’t put at a disadvantage had the men continued to advance on her? Who knows? It’s a pretty hypothetical scenario – but in any case, Nagi had one more ace up her sleeve.

She chose a relatively well-lighted and public place to sit by even though Loser Park was mostly abandoned. Therefore, she placed herself in a position wherein she could easily draw attention to herself and the would-be attackers just in case she couldn’t handle things. Also, she was aware of one key element in this situation…

That’s right, she was aware that there was some blue-haired guy who was in love with her and who was ready to leap out of the bushes to her rescue at any time just in case she couldn’t handle it…

And that my friends, is how to avoid rape – as demonstrated by Nagi Sanzenin.
This has been Hayate Reflections and this is lordcloudx out. See you next week!

Been trying to familiarize myself with my White Nights watercolor set recently. I'm just about used to how pigmented the paint is with even just a slight dab. This is my first time drawing Nagi in her summer uniform. She looks cute as always, of course. 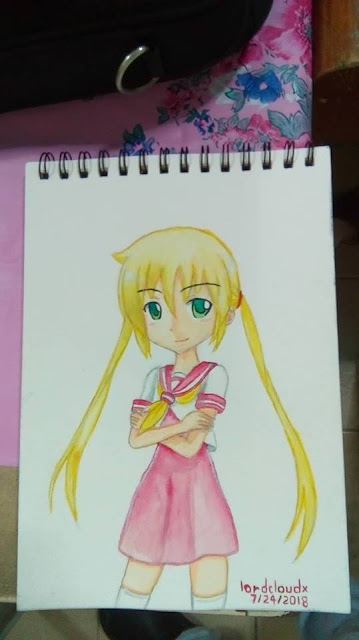