My 7-Day Trip To Kabankalan: Day 7

For our seventh day in Kabankalan, it was business as usual in the morning. Of course, there wasn’t a lot of pressure now because it was the last day and there was really nothing else to be done.  The graduation ceremony together with some presentations from the different groups would take up the entire afternoon. Meanwhile, many of the participants in the Purposive Communication class still had their comprehensive exams for the PhD’s and thus, were absent.

Time  For... Some CARTWHEELS!

We arrived at around 7:45 AM at the CPSU Arts and Sciences building. Of course, this time, as expected, there were no students around. So my mother and I still took the time to set up the laptop on the big screen anyway.  She wanted to show everyone that the bloopers were now gone in the final video.

Seeing that there were no students around yet, we took to finishing up on some odds and ends such as the requirements to be passed to the administrators of the seminar and grading some of the students’ works that we hadn’t read yet.


It was a pretty slow day, so I had time for… some double cartwheels!
LOL! Well, that aside, I think about 4 students did come in by around 9:00-10:00 AM. We also learned that most of teachers went on a sightseeing tour of Kabankalan with their students. I think my mother was invited along, but she declined.

Since no one else seemed to be showing up, we decided to get back to Kabankalan City for lunch at CityMall with the four students who showed up today. We hitched a ride with a teacher who was on his way there.

There was a funny episode at the Mang Inasal stall inside of the CityMall food court. This conversation took place in Hiligaynon, but I’ll translate it. My mother kept asking the cashier whether she was a girl who was actually a boy quite jokingly. The clerk just kept smiling and said, “No, I’m a girl-girl.” And my mother answered “Of course you are,” with a knowing smile on her face.  Ms. CV, one of the students who accompanied my mother and I to the counter ran away.

You see, the cashier was really a girl, but she had a sort of masculine appearance and body structure, so my mother automatically assumed that she was a homosexual man. Anyway, she did return and apologize to the lady when we told her that she was mistaken at our table.

Lunch had to be prepared inside of the Mang Inasal stall first, but before that, I was quite touched when the students presented my mother and I with some going-away presents. I was especially thrilled because they got me two 9x12” Sterling sketchbooks along with a 36 color set of Pentel Oil Pastels (the same brand that I actually do use).  I was just really happy that these people whom we’d just met a few days ago would be so thoughtful – and actually even select a present that would really appeal to me. Anyway, this is the first artwork I’ve done so far using the oil pastels that they gave me. 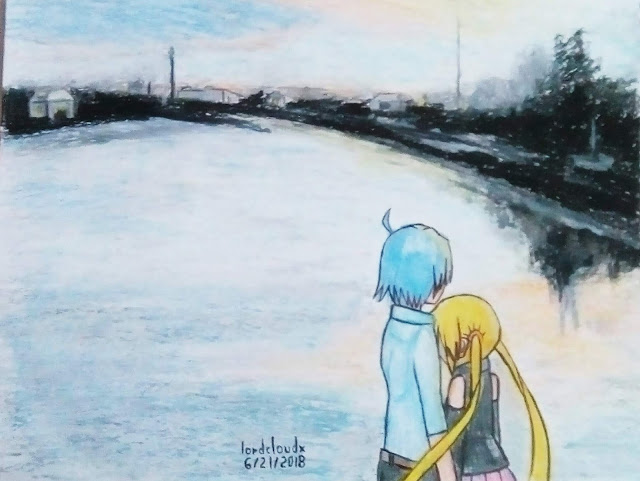 After lunch, Ms. G drove us to the hotel where we picked up a few things for Ms. CV who would be hosting the graduation ceremonies. My mother insisted on dressing her up fashionably. Also,  I accidentally closed the door on my mother’s hand because I took the passenger’s side from the driver’s seat and I didn’t realize that she had put her hand on my side of the door using the bar in-between the back seat and the passenger’s side seat to pull herself up. Fortunately, the pick-up was a new car with a child safety feature.

When we got back to CPSU at about 1:30-2:00 PM, the ceremonies were just about to start, so we made our way to Mt. Balio Hall. There were a few introductory speeches before each class was finally allowed to show their group presentations. Everyone had something unique to offer. Of course, for our Purposive Communication group, it was the video.  The class then presented my mother and I with some additional tokens to show their appreciation for us. I got a nifty red/black Japanese fountain pen. At this point, I started sketching a new drawing of Nagi that I planned to finish painting on this day.

After the ceremonies, it was time to say goodbye to everyone. The class actually wanted to treat us to dinner, but my mother politely declined because we were already scheduled to have dinner with the faculty group.

After that, it was once again time to drive back to the hotel. The representative from DENR entertained everyone inside the vehicle during the trip with her ability to do over 50 different voices and make up impromptu short stories with slightly derivative yet somewhat compelling short stories on the fly. It seems she was once a voice talent for a radio station.

We left some of our baggage inside the hotel and then we were driven over to a local restaurant for dinner with everyone. Dinner was fine, but I was actually a bit busy trying to finish my painting before the day was through.

Everyone went on their separate ways after dinner. My mother and I got some ice cream at a 7-11 that was next to the restaurant and then we took a short walk around the plaza before we decided to ride a tricycle back to the hotel. It's funny because this was actually the first time that we'd had time to walk around Kabankalan City on our own. Unfortunately, most places were now closed.

Kabankalan City seems like a really peaceful place at night. There were even a few kids riding their bikes on the plaza – and it was already about 8:30 PM.
The hotel was only about 5 minutes away via tricycle and we were back in no time flat. It was now time to pack up our things. I finished my painting before this. Luckily, it was a Saturday and I had no work to do. 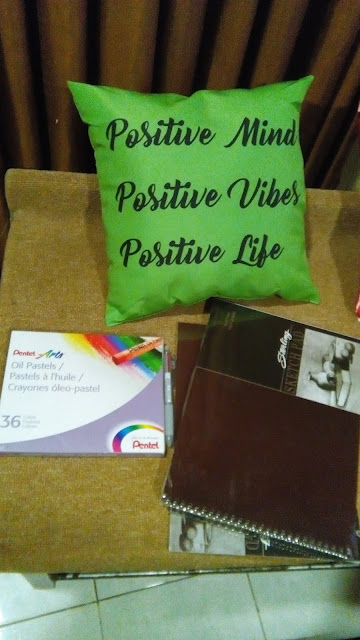 We would be leaving for Bacolod early the next day, so I took the time to snap a picture of almost all the gifts that the Purposive Communication class gave us together with my Nagi doll.

A Piece Of Me 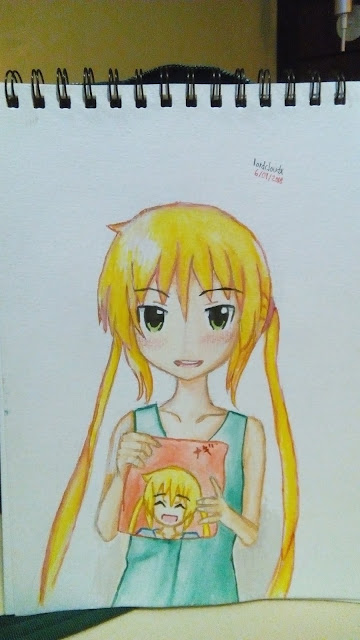 Come morning the next day, it was time to say goodbye to this Nagi painting that I finished the night before. If you know me, then you would realize that I never ever part with any of the originals of my Nagi paintings… but I wanted to leave this one behind in Kabankalan for the CPSU Purposive Communication students. I never liked the place, really… it’s very scenic, but I’m a city-bred kid who is used to big malls and restaurants and other places that don’t close by 8:00 PM… but still, I wanted to leave a piece of myself in Kabankalan because of the many irreplaceable memories captured through the lens of my smartphone’s camera and the wonderful realizations that this place has bestowed upon me – inimitable moments that I will treasure forever, in the frame of my heart.

This is lordcloudx and this has been my 7-day trip to Kabankalan. See you once again in future travels to come.