My 7-Day Trip To Kabankalan: Day 5

Day 5 of the trip and the 4th day of training was a bit of a “taking it easy” day. Unfortunately, from all the excitement at Mag-Aso falls, my mother and I took it a little bit too easy and woke up a bit late. We went down for breakfast at about 7:30 and leisurely ordered the bacon, eggs, and rice… but we only got halfway through our meal when someone pointed our attention to the CPSU transport vehicle which had been waiting for us for awhile. Thus, breakfast was cut abruptly.

Pretty awful way to start the day, but that was just about the only setback anyway. After the usual 30-minute ride, we got off at the Arts and Sciences building and by 8:00, the students came filing in. Again, things started off with a Zumba session per my mother’s request. After that, it was time for a lecture on communication processes from my mother. Fortunately, she can actually manage to keep a lecture interesting and keep the class actively participating even if it took the entire morning session.

Finishing Up Some Tasks

After lunch, Ms. C called in from her house and requested that the class be moved to her residence in Kabankalan City because they still needed to dub in the voices for the video. Thus, after asking for permission from the people in charge of the seminars, we were off to another trip to Ms. C’s house.

However, when we got there in the afternoon,  there were some technical difficulties and the video hadn’t been compiled by the videographer yet. We talked over how it could be done and Ms. C had quite a few ideas and I actually approved of them. I was just a bit wary since she planned to shoot more footage in the plaza afterwards and there were two days left before the final presentation. The video advocacy would not only form part of their finals grade, but it would also be the presentation of the Purposive Communication class for the culminating activity on Saturday. Having had some experience with working on a tight timetable, I knew that grandiose plans had ways of falling apart… with that said, I’d already made up my mind at this point to install VSDC on my laptop later in the afternoon.

Since recording couldn’t be done, my mother instructed everyone to use the idle time to finish up on their literary analyses – which was what the rest of the afternoon was spent on. I also helped everyone finish setting up their blogs on blogger. We dismissed earlier than usual at about 5:30 PM since the students wanted to do additional shoots and work on the video a bit more. We viewed the raw footage and they looked quite stunning, actually. The problem is that the speaking parts were muffled by the sound of the waterfall. Obviously, they had to be redubbed. Also, this was pure raw footage and the videos were shot in separate files/clips. They had to be compiled – which I really stressed upon everyone. Compiling the video should take priority with such a short amount of time left.

Anyway, Ms. C drove us back to our hotel after class was dismissed. Most of the students left behind had finally set up their blogs at this time, although they still needed to finish writing the 500-word blog post on the Mag-Aso falls trip.

Some Time To Paint

Since we arrived earlier than usual at the hotel, we took the time to freshen up and take a nice shower before coming down for dinner at the restaurant. The Art Appreciation trainer was having dinner there as well, so we joined her and had a friendly chat. My mother recommended the Asian Salad, which she’d had the day before. 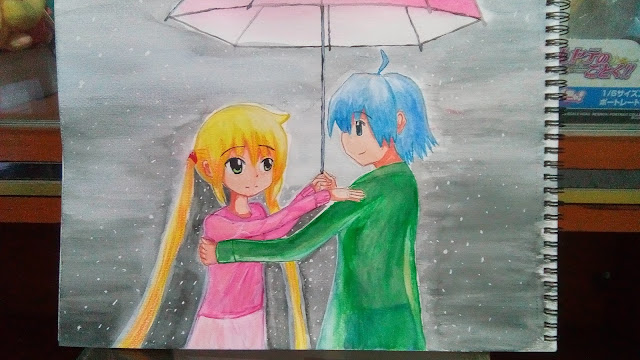 
After a nice dinner, we went straight back to our hotel room wherein I finished up my work for the day (I was actually sneaking in some work here and there during the seminar) and then I installed VSDC into my laptop because I expected quite a bit of trouble having assessed the situation earlier. It was still only about 9:00 PM when I’d finished all the tasks for the day, so I had some time to re-paint one of my Sakura Koi paintings into a larger 9x12 watercolor pad using Gansai Tambi colors.  It also gave me a chance to make use of the new brushes I got at Expressions. I think the new image turned out pretty well. I’m not too sure I like the placement of the umbrella though.