Hayate Reflections: I Have Hayate's Luck

Luck -- one of the main contrasting characteristics of the manga's main couple, Hayate and Nagi. We all know that Hayate has extremely bad luck, but it is later on revealed that Nagi is his polar opposite in this regard and has extremely good luck. It is especially prevalent when she actually relies on her brains combined with her good luck to defeat Maria in a game of roulette in the penultimate arc of the series.


In any case, even before I started watching/reading the series, I feel as if I have always had the same type of luck as Hayate. For example, if there were 45 people on a boat -- all strangers, and they had to vote off one person at random, that person would be me by a majority vote.

To give you a more concrete example though -- there is this promo that my local gas station runs wherein you can get freebies from a restaurant chain called Chowking everytime you gas up. You just press this button and wait for the machine to decide whether you won something or not. If you win, the machine will print out your prize coupon and send the code to your phone. You'll need both to claim your prize at any Chowking store.

It's supposed to be super easy to win. Anyway, I failed to get a prize on all three attempts I did -- which is unsurprising. I have Hayate's luck after all -- but wait, Hayate's bad luck often leads into a comedy of errors at his expense. Cuties episode 1 is a good example of this.

Well, here's the thing: I actually managed to win a prize on my fourth try. So I thought, "whoa! My luck must be changing?"

So when the machine printed out my prize... it ran out of paper and failed to print out the code needed for the coupon. Also, I'm 100% sure I entered my phone number correctly to have the code sent to my phone -- but the message never came. The machine cannot reprint the same code nor resend it to the winning phone. In other words, I won on record, but I couldn't even claim my prize.

Truth be told, I wasn't all that excited about the prize. It was more of a matter of principle. I just wanted to see if I could win something purely by chance.

Of course... my luck isn't all that bad, I suppose. I rooted for Nagi and she won after all. I may have used up all the good luck permitted to me in this lifetime with Nagi's victory, but I will always be super happy with the results.

I kept it nice and light today. Pretty sure a more thorough discussion on how luck affects the plot of the series is in order some day -- but not today!

Fanart Corner
I bought a set of 24 Prismacolor Premier colored pencils recently and used it to render this quick fanart of Nagi. I must say, these colors are really quite vibrant and they blend seamlessly. Anyway, see you next week~ 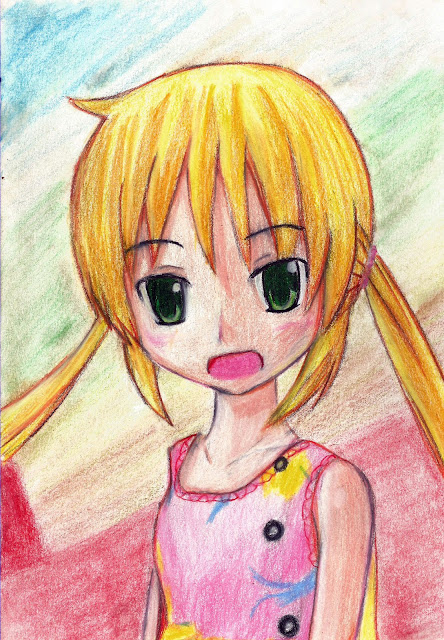 Posted by lordcloudx at 9:56 AM