Hayate Reflections: Time To Be Pedantic About The Royal Garden

Ok, let's talk about the Royal Garden this week. See, I've noticed a lot of fans of this series while it was still running really loved to employ double standards a lot and didn't even think twice about it.

Sure I'm guilty of that myself, but I am quite self-aware that I am doing it -- so that makes all the difference. Well, it probably doesn't, but I digress. Let's get back on track -- the Royal Garden.

So this week, I want to be a bit pedantic and list off some complaints/questions off the top off my head about the Royal Garden and how it functions.

Does It Have Magical Electricity?

Based on the what we have been shown about the Royal Garden, it is entirely possible that it does not have electricity. After all, we see here in this panel from chapter 181 of the manga that the mansion is basically powered by magic and as Athena says: 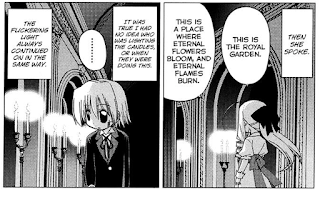 So that would explain how the place gets lighting, but there is a bit of a conflict here. Take a look at these panels from chapter 180. 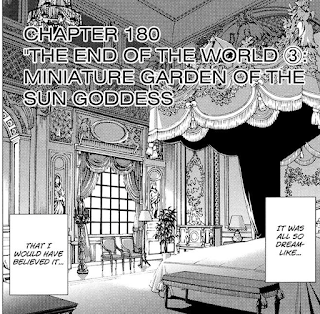 Here is Athena's sacred bedchamber from chapter 180. The chandelier can be lighted with candles, so it's no big deal, but check out that huge electric lamp as well as the bedside lamp over there. To be honest, this place looks like a more ornate version of Nagi's room.

So yes, if it is a place where eternal flowers bloom, then does it have eternal electricity as well? Is there some eternal nuclear fusion generator buried somewhere in its unexplored depths?

Does It Have Plumbing?

Well, I'm pretty sure it does. If you consider this panel once again from chapter 180.

So yes, we have running water, folks. Homesteaders and preppers would be proud. I suppose given the magical nature of the mansion itself, it probably has eternally running water.  Therefore, bathing, washing dishes, washing clothes and I suppose potable drinking water are fine because the mansion itself most likely has a magical water purification system  -- or Athena can just do that herself with her vast magical powerz, but then, here's the thing: plumbing also means that it needs to have some form of human waste disposal -- so how does that work?

Given that the mansion itself exists in some plane of existence that is clearly different from our reality, then this means that it needs to have a self-contained waste disposal facility. Of course, if we assume that the space around the mansion within the reality of the royal garden is infinite, it wouldn't be too hard for whatever magical entities that created the mansion to provide it with an eternal sewage facility.

Of course, they could just be dumping their sewage off a cliff. That reminds me, how do mansions isolated from the rest of the world which seems to be pretty common in anime/manga deal with their waste material anyway? 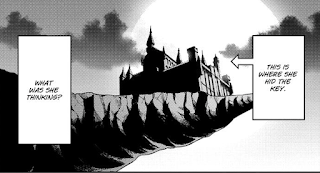 This is an issue that was never really tackled during the run of the manga. In fact, we never even see Hayate or Athena eating while inside the Royal Garden.

Given that we have very little facts to rely on, there are quite a few assumptions that we can make.

1. Athena simply enters and reenters the portal at will and goes grocery shopping. Given that she is apparently super rich, that wouldn't be much of a problem.

2. Athena can use her magical powers to conjure food as well. Of course, magic generally consumes stamina in fiction (or mana points/magic points/mp) if this were an rpg. Using the rule of equivalent exchange, this means that Athena can only conjure up as much food as she has the energy to do. Of course, by consuming said conjured food, she can easily restore her stamina/mp and conjure more food. If she is wise (which she is based on her IQ level and lore, not on actual deeds) and stocks up on long-lasting food items, then that easily solves the food problem.

3. This is probably the most plausible. Athena mentioned that flowers bloom eternally in the Royal Garden. Given that it is known as a "Garden," there might be a royal food garden hidden somewhere inside of it as well where eternal fruits and vegetables grow. As long as you get enough molybdenum and other essential nutrients, a vegan diet can actually be pretty healthy.

4. The Royal Garden has an eternal refrigerator that has every food item you can imagine and it is magically restocked after every 24 hours.

5. The Royal Garden is magical. You don't get hungry in the Royal Garden. You can take in food and liquids as much as you want, but your body doesn't need it.

But Seriously, Eternal Electricity Is Such A Fun Idea
We don't really see any electronic items inside the mansion, but who is to say that it doesn't actually have eternal electricity as mentioned earlier? We could attribute the lack of electronic appliances to Athena's penchant for being traditional and old school After all, her character is written to be someone who is not that adept with technology -- although on the other hand, she did develop that hi-tech monitoring facility inside of Hakuo with Isumi -- so yeah...

So anyway, just think about it. You could power up six different monitors at once... oh wait, mai waifu Nagi already did that. 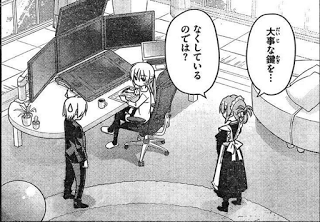 Anway, the point is that you can do something as awesome as that and never have to worry about the electric bill afterwards.
Does It Have Wifi?

Oh shi... Nagi (13 year-old version) would never be satisfied if she were trapped in the Royal Garden instead of Athena.

I mean, Athena and Isumi needed that special facility inside of Hakuo in order to monitor the inside of the Royal Garden. I doubt that normal wifi signals could reach that far considering that it seems to be an alternate reality.

None Of This Matters But...

Of course, these are all irrelevant details and it's really not worth even thinking about these when there are glaring plotholes and inconsistencies which are far more critical to the story than any of the stuff I've mentioned in this article.

Still, I think that it should serve as a warning to future writers that readers can actually get this pedantic, so you'd better be prepared to have an explanation for every nook and cranny of your made-up reality if you choose to go that route.

With that said, this is still one of my favorite stories ever with the girl/woman that I fell in love with now and forever. Anyway, I'd love to hear your thoughts on the Royal Garden and how it works, so tell me what you think in the comments.

So with that said, see you next week~

Hayate's birthday is coming up, so I came up with this watercolor painting. It's actually two different paintings that I put together using digital editing software. I'll make a fully digital version of this by the 11th.

Posted by lordcloudx at 9:14 AM