Hayate Reflections: My Favorite Songs From The Series

Ok, let's keep this post nice and ... neutral, I suppose. I realize I've been making a lot of shipping posts lately and I guess it's time for a break. Therefore, I promise to keep the shipping talk to a minimum in this article wherein I share and explain some of my favorite songs from the series.

Here they are in no particular order.

Ko No Me Kaze

As a Nagi shipper, how can I not love this song? It's basically the main dynamics of Hayate no Gotoku! In a nutshell. The lyrics do a great job of describing the bond between Hayate and Nagi. It's also a sweet, sentimental tune to listen to by itself. It really triggers a lot of nostalgia whenever I heart it.


Ugh... the intro on the video sounds a bit broken. Anyway, speaking of nostalgia, this is one of my favorite anime opening songs of all time -- and not just in Hayate no Gotoku! It's just so upbeat and happy. While Ko No Me Kaze shows a little bit of the serious side of the series, this song just captures the happy-go-lucky feel of the entire show as a whole. It's a song that I think perfectly embodies the series' wacky, lovable cast.

Heaven Is A Place On Earth

YES! Shameless-self-insert for the win! Anyway, I'll be honest, taken by itself, this song barely sounds like a Hayate song -- at least if your perception of the series is based on S1 and S2 -- and it should very well be at the time this movie was released since it was after S1 and CTMEOY hadn't aired yet. With that said, it is once again a song that really fits Hayate x Nagi perfectly. It feels like a song that was written just for them and it's by the same group that did the amazing To Aru Kagaku No Railgun openings. It has sweet, and yet rocking tune that comes out epic over-all. I especially love the slow instrumental start. The song develops a bit like Nagi's personality in the manga IMO. Sweet and slow at first, but gradually more and more prominent.


Wait, a Hina song? Really? Well, yes. This is a slower version of Power of Flower. I don't really care about the song's message, but Shizuka Itou has a very nice voice. It's very pleasing to listen to this one, so it earns a spot in my list.

It's a song sung by Nagi herself (well, Rie Kugimiya singing as Nagi), what else is there to explain? Well... ok. Out of all the Nagi solo songs, I think this is the one that captures her childish, quirky side perfectly. Kugimiya's voice can also be quite sweet at certain portions here. Really shows off Nagi's tsundere-ness.

Can't Take My Eyes Off You (Nagi x Hayate)


I have to admit that the opening sequence of the anime really influenced me a bit when I chose to include this song in my list. Gotta love the Hayate x Nagi shipping. Another reason is that this version starts with Nagi singing in her super cute voice. I love to play it inside the car when there's a passenger around who knows nothing about me. When Nagi's singing starts, it really surprises them since her voice is so high-pitched and child-like. (cute!)

Here I Am Here We Are (Hayate, Nagi, Ruka version)

Again, the main reason why I like this song is because it's a Hayate x Nagi song. I actually made a translation for this one but you see, I'm an unrecommended (that's not a word, btw but if you're pedantic enough, I suppose it magically transforms into a legitimate word) translator who obviously uses machine translations and edits them into "seemingly correct" English (LOL) and my translations cause irreparable, horrible, 'orrible harm to DA WORLD, so nevermind.

Anyway, it's a Hayanagi Song and it's Hayate and Nagi singing it. What's not to love about it?

Although Ruka is supposed to be a super idol, I think Shizuka Itou is the one with the better voice. In any case, I'm not too fond of the many Ruka songs that came out together with CTMEOY, but Paradigm Shift is that one exception. I can't place what it is I like about this song exactly, but it just seems to me that it fits the singer's voice quite well -- unlike many of the other Ruka songs which sound a bit like she's trying too hard to be Risa Oribe.

Aaand that's a wrap. These are my favorite songs from the series. If I were to pick my favorite, favorite one, it would be a toss-up between Heaven Is A Place on Earth and Shichitenhakki Shijou Shugi.

What are your favorite songs from Hayate? Let me know in the comments!

Fanart Corner
Today is nice twin tails day in Japan. Here's a nice girl with some very nice twin-tails for you~ Naturally, it is mai waifu Nagi! Anyway, see you next week. 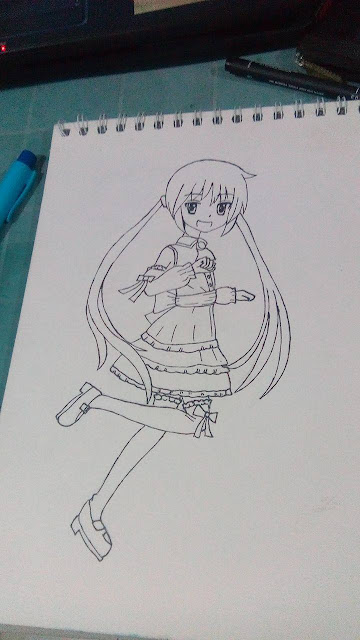 Posted by lordcloudx at 8:59 AM