While many people laud the Golden Week arc as the high point of the Hayate manga wherein things got serious and the plot really kicked in, I personally am not that big of a fan of this arc. In fact, the only reason that I liked it is because in my mind, even before the manga had ended, Hata had confirmed the HayaNagi ending with this arc and had heavily foreshadowed Nagi's turning out to be a capable, responsible individual someday.

Now whether Hata was actually thinking these things when he was actually drawing the arc is something we'll never know unless he's confirmed it somewhere -- which personally, I'm not that interested in finding out. Of course, given that things did turn out heavily in Nagi's favor in the end, I'd say my speculations are at least partially justified.

What's Wrong With Golden Week?
With that said, let's just get straight to what I believe is wrong with the Golden Week arc. No, it's not about having plot holes or that the drama was forced or that it was Athena's arc. After all, it ended in Nagi's favor no matter what.

What I did not like about the Golden Week arc is that it did not seem to fit with the mood of the series at that time. Yes, there had been a few times where the series got serious and abandoned the comedy for a moment in favor of actually taking the characters and their situations seriously, but in the Golden Week (and End of the World arc) arc, the tone of the entire series suddenly shifted. All of a sudden, it seemed as if people could actually die in the series and Hayate's decisions actually had some really serious implications. (Of course, we know this isn't true because no one really died in the series unless you count Yukariko, but she's already dead.)

Up until this point, Hayate no Gotoku! Was still pretty much a gag manga with the romantic and dramatic elements often developed in the background and taking a back seat to the comedy in the foreground. For me, the change was too drastic and it feels like the Golden Week and End of the Week arcs in particular do not fit in too well with the rest of the series.

The Same Could Be Said For The Finale

Actually, the same could also be said for the finale. Most of my criticisms for the Golden Week Arc defnitely apply to the last few chapters of the manga. With that said, I can be more forgiving of the finale, because of two reasons: .

1. It's the finale. It's the manga's last hurrah and Hata's last chance to wrap things up and end it the way he wants.

2. At this stage, the Golden Week arc from before had already set a precedence. Therefore, when the finale came, the change wasn't as jarring. Also, the build-up to the misunderstanding bomb going off had been gaining ground. Thus, the finale didn't feel as out of place with the rest of the manga as Golden Week.

3.  The transition to the finale felt a lot smoother than that of the End of the World Arc which just came about after Hayate was reminded of Athena by Nagi. There were many permanent changes already set forth by the time of the level 5 arc. The debt was cleared for real. Nagi was maturing quickly -- which is self-evident with the way she ended level 5 with a bang and without Hayate's help.

Well, here are some pieces of fanart. Two for today. Also, Hata retweeted me again. Thank you, Hata-sensei! I will love Nagi forever! Naturally, I love the HayaNagi pairing too~

See you guys next week for sure~ 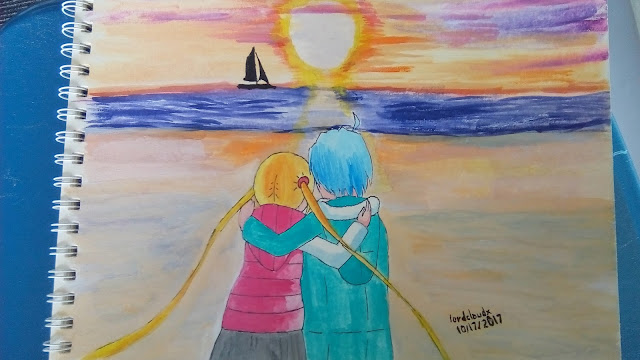 Posted by lordcloudx at 8:25 AM