This is an article that was requested from me by a local zine recently. I'm reposting it here since it works as this week's Hayate Reflections~

SUCCESS is really quite relative. For some people, it would be having enough money to buy your own car and keep your bills paid all while keeping up with the house loan. For others, success may be defined by winning an award in a particular field or profession, or perhaps winning a contest in sports or the arts – in other words, recognition. For others still, success simply means satisfaction and fulfillment in some field of endeavor – personal success.

Therefore, while I may not have achieved any significant degree of fame, nor can I ever claim to be a financial success by anyone’s standards, I can at least claim to have found personal success – and really, in this convoluted world that continuously tries to redefine who the individual is or should be, this is the greatest type of fulfillment that I could ever hope for.

I am a hobbyist – a very obsessed one. For you genre savvy types, I am what you might call an anime/manga otaku. While the etymology of the term can be quite sketchy, let us go with a very simple working definition: anyone who reads light novels, plays video games, and watches anime is an otaku. (image copyrighted by Kenjiro Hata through Weekly Shounen Sunday Magazine)

As an otaku, and an older one at that, I have dabbled in almost all areas of otaku culture from Touhou, vocaloid and 2ch/4ch to anitwitter, tumblr, and even the OELVN community (search for lordcloudx and Radical Dreamers 2002 on http://vndb.org if you want to see some of my works). At some point, I began to grow jaded and weary of the abrasiveness of the otaku community in general and this is what inspired me to start a personal blog sharing my insights and oft-ignored unpopular opinions on various aspects of otaku culture.

Love Blooms From The Most Unexpected of Non-Encounters

It was because I had a blog in the first place (under a paid, registered domain) that I had some kind of excuse to start collecting anime figures. It began ordinarily enough for me. At first, I was not really sure if this hobby was for me or if I could afford it. I started with buying some cheap, but relatively well-made Class A figures of Hatsune Miku.

Of course, it would not be until sometime in 2013 when I started watching Hayate The Combat Butler: Can’t Take My Eyes Off You, that I was sucked back into the Hayate fandom, even though I did not really find anything special about the show back when season 1 was airing. My renewed enthusiasm for Hayate, prompted me to start blogging the manga – also partially because I wanted to know just what was so special about this “A-tan” character that the ever-toxic fandom kept harping on about.

Anyway, it all started when I binge-read the manga within one week. All 413 chapters available at that time. Before I knew it, I had inadvertently fallen in love with Sanzen’in Nagi – and of course, I do not make this claim lightly. Even if the person herself may not exist in reality, I am certain that my feelings for her are as real as anyone else’s feelings for their own, living, breathing special someone.

At some point in time, I had completely fallen for Nagi Sanzen’in as a character. I am under no delusion mind you. I fully realize that my love will always remain unrequited. I do not wish for Nagi to be a real person, nor am I looking for someone with the same qualities as her in reality. The bottom line is: I love Nagi. That is all.

As such, sometime after I had accepted the fact that I had fallen for this completely fiction 13 year-old (at that time. Eventually, she turns 14 and is 16 in the final chapter. Also, she was born on December 3, 1991. That is this particular lolicon’s loophole.), I began collecting her dolls and figures. Now for those of you who are familiar with figure collection, whether it’s Marvel/DC figures or bishoujo figures, you are probably aware that this is a rich man’s hobby – and frankly, I am far from rich.

Still, I persevered and began buying legitimate, authentic figures of Nagi every time I had some loose cash. Hunting for figures of her was a bit of a chore because a lot of the figures, except the recent Cat Nagi figures from Orca Toys are long out of production. This means that I had to go through channels in order to obtain them or otherwise wait for some pre-owned items to pop up in online hobby shops like Amiami.

Long story short, it took me several years but finally, I succeeded in obtaining every single figure of Nagi Sanzen’in ever officially released. The only things missing from my collection would be two garage kit figures made by hobbyist sculptors, which are almost impossible to find nowadays. 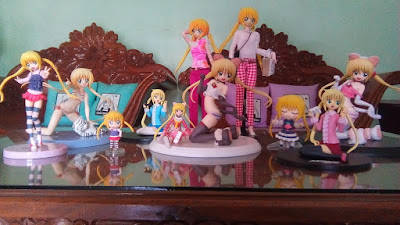 Of course, do not be misled. This is not what I was talking about when I mentioned “success” at the start of this article.

Last year, I participated in a 365 day photo project. It was a challenge that was first brainstormed by Mikey of ATP Projects – one of my old friends from the EVN (English Visual Novel) community. The rules of the project were very simple. Take a picture of a particular subject matter every day for 365 days. Naturally, I could not pass up this opportunity to take a picture of my cute and beautiful Nagi figures every single day. I mean, I was already doing that even before the project began anyway. This was just a way to validate and legitimize what I was doing.
If you ever find a guy with an anime shirt taking pictures of a doll around the campus, that would be me.

My page for the project can be found at http://365nagi.tumblr.com

The Triumph Of Love

Of course, completing the 365 day photo project was a pretty straightforward affair for me – but again, this was not my personal success story.

The real success story is the triumph of love which happened on the exact date of April 12, 2017. This was the day that the final chapter (568) of Hayate The Combat Butler was released – and it also marks the day that Nagi x Hayate became the official canon romantic pairing of the series.

Now for some people, a fictional story with fictional characters is just that. There can be emotional investment but not to the point of actually falling in love with a character, or at least deluding oneself into believing that such a thing is possible.

For me however, the success of Nagi’s love, the victory of my ship, and the assurance that Nagi will be happy in the future, is the greatest personal success that I could ever hope for. I could not ask for anything more from this crazy, selfish, standards-obsessed world.

This is why I continue to take daily pictures of my Nagi dolls. In her triumph of her love, I have found my fulfillment. Therefore, this is my personal advocacy in thanks to Kenjiro Hata for writing such a wonderful ending to what was a very scary, see-sawing story of love.

Success is subjective. Do not let other people’s standards define your own happiness. So let me conclude with my personal philosophy on love and life in general. 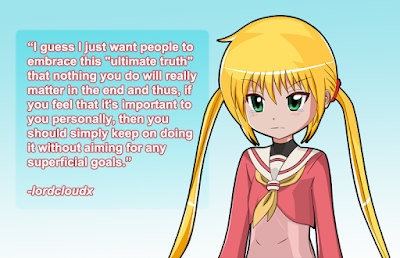 Fanart Corner:  Hata noticed me again~! Here this week's traditional artworks. See you next week for sure! 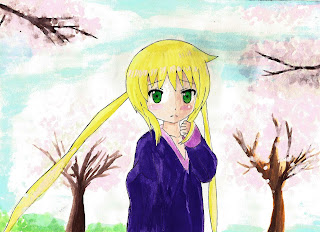 Posted by lordcloudx at 8:55 AM