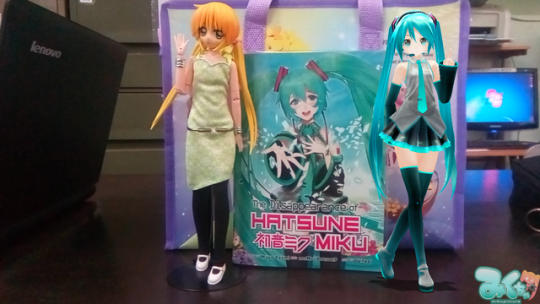 I recently finished reading a light novel that I bought on a whim. I saw it inside a local bookstore and seeing that it was Miku on the front cover and it was in fact a Hatsune Miku novel, I just knew I had to have it.

Anyway, I went into this novel without any strong expectations. Of course, as a vocaloid fan, I was familiar with Cosmo BousouP and the song that this novel is based on. With that said, I had no idea what kind of writer this person was nor was I any more familiar with the co-writer, Muya Agami. Naturally, this has nothing to do with Agami-san’s ability nor fame as a light novelist, but with my own lack of experience in the genre.

With that said, “The Disappearance of Hatsune Miku: The Novel” just resonated well with me all throughout. It gave me just the right amount of all the little things that I like to experience in a good story and for me, despite a few parts that felt fairly rushed, this was a very satisfying story to read.

There are many aspects to this novel, but don’t get me wrong. It’s not like it’s overly complex. The pseudo science won’t give western Sci-Fi authors a run for their money anytime soon and this story’s science is definitely nowhere near the believability of something like Steins;Gate. However, looking at it as a vocaloid origin story, it works very well indeed.

In this particular story, Hatsune Miku is first introduced as a very advanced android who was made to be as close to a human being as possible. She is then put in the care of an intern named Shinosato Asano who was chosen simply because his personality tests indicated that he would follow orders without question and he would not be a hindrance to the experiment. Miku then starts living as Asano’s cousin and is introduced to his circle of friends and even his little sister.

Anyway, at the end of the story, without spoiling things too much, let’s just say that the android Miku eventually becomes the Miku that we all know and love.

I like the subtle nods to the actual vocaloid software, such as Miku’s seven personalities: normal, dark, solid, light, sweet, vivid, and soft – which are obvious allusions to her append libraries.

Also, Miku is really talented at singing in this story and everyone who hears her just loves her voice.

Of course, you don’t even need to be familiar with vocaloid to enjoy this story as it is. By itself, it’s actually a very beautiful love story between a human and an android. I’d compare it to planetarian but with more focus on romance. I love how Asano eventually comes to terms with his true feelings for Miku.

At first, he is constantly in denial over what he feels for her because he keeps trying to remind himself overtly that this girl is an android and that she doesn’t belong to him. However, when it is Miku herself who confesses her own feelings for him, all his doubts and hesitations are cast aside. Really, if only Hayate Ayasaki had made his feelings just as clear towards Nagi much earlier, then the ship wars wouldn’t have escalated so much and the backlash from the fans over the Nagi ending would have been much less – with that said, that was that and this is this. (I still love the HayaNagi ending for all its flaws, so there!)

What I like about this particular love story is how there is a huge rift between the two of them. Two kindred souls (let’s assume that Miku has a soul. After all, Kunagisa Tomo from Zaregoto claims that the soul resides in the brain) separated by an irreconcilable difference. He is a human being, she is an android made to imitate humans. And yet, both parties are able to cast aside all their differences in the name of love. It’s a love story that may seem cliché for some, but that really sits well with me. Sorry, but not every story needs to have some kind of “avante garde coz I wanna be unique” plot twist.


I also love how Hatsune Miku is never treated as a sex symbol in this story. Asano’s reasons for falling for her are the same things that I believe Hayate must have seen in Nagi: Her smile, her cute ways, the special moments they spent together – nothing about sex or sexual attraction is explicitly or even implicitly mentioned. After all, I don’t think Miku’s creators even built the necessary parts for that sort of thing into her. Still, Asano comes to terms with his feelings and confesses outright that he loves her – so yeah, I love how it challenges some people’s bigoted definitions of romantic love.

Strong But Unobtrusive Side Characters

The side characters in The Disappearance novel all play their roles perfectly without getting in the way of the main story. Their presence is strong enough so that they leave a lasting impression on the reader’s mind, but not so strong that they become the focal point of attention. There’s Ishii Juhachi, a university dropout turned DJ who is actually a very talented hacker. Kurose Aika, Asano’s attractive, strong-willed, onee-chan like co-intern, and Shinasoto Yoruko, Asano’s younger sister who takes a liking to Miku and is convinced that she’s her brother’s girlfriend. In the short time that we come to know these characters, they take on a life of their own and do just enough to come out of their shells beyond their archetypes.

Similarities To My Story

Ever since I started reading this story, I always felt that it was very similar in spirit to my recently completed story: Samantha and The Pieces of A Heart. On the outside, both stories are completely different from each other, but the similarities  in some aspects are so strong, that it almost feels like the author/s of Disappearance and I drew inspiration from the same sources. Is this some kind of shared consciousness in action?

For one, check out these excerpts from actual pages of the novel. Asano makes use of the term “pieces of my heart,” which is already very similar to “pieces of a heart.” To add to this, Miku has seven personalities or “seven hearts” in this story, while in my story, Samantha is looking for seven pieces of a heart.

Also, Samantha is a puppet, or basically a non-human android who wants to obtain a heart to become more human. Meanwhile, Miku in this novel is an android who was specifically built to imitate human behavior.

There are more similarities too. In Miku’s story, the main antagonist is Morisu sensei, Miku’s creator who sees her as nothing more than a tool and eventually a failed test subject to be disposed of. In my story, Professor Ian loathes Samantha because he also helped to create her and like Professor Morisu, he is cold and antagonistic towards Sam because she is deemed as a failed experiment.

Anyway, the similarities to my story were basically just icing on the cake to top things off. All-in-all, I’d say The Disappearance of Hatsune Miku is a must-read for all vocaloid fans. Buy it if you love vocaloid and Miku. Even if you don’t, you will find it to be a very satisfying read.

I must note that the ending can be a bit of a downer, but the journey towards getting there was satisfying enough and foreshadowed the eventual conclusion well enough that I really can’t complain.

The novel is published in English by Seven Seas Entertainment and may still be available at www.gomanga.com

Posted by lordcloudx at 8:15 AM