Hayate Reflections: What Hayate No Gotoku! Meant For Me -- A Guest Post By Mellhurst

Ok, lordcloudx here with a little intro first. First of all, I finally got my limited edition volumes 51-52 (preordered from CDAsia delayed by local post office service  :P). There's a whole lot of content in the extra books, but anyway, I'm only interested in the HayaNagi bits. Seems Maria's got an entire backstory with some new characters even in her extra story in the special limited edition books. Not that I'm interested... not even a little bit~ 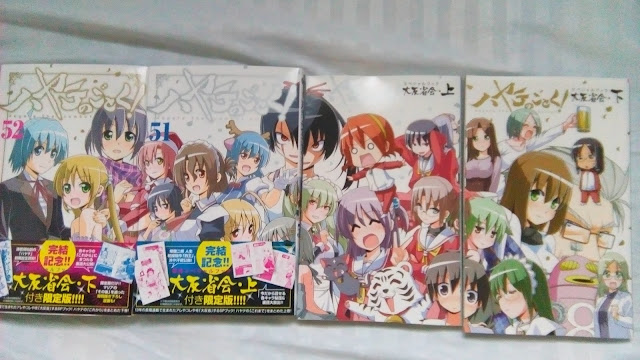 I'm not sure if the final volumes deserve a full review, really. They're just pieces of extra content thrown in by Hata. Anyway, it's worth noting that in vol. 52, there's a little epilogue showing Maria about to go off and meet up with Hayate and Nagi to collect her birthday/Christmas present.

Before that, Chiharu and Kayura have a conversation wherein Chiharu speculates that Maria might have bet on a 1% chance that Hayate and Nagi would get through everything on their own but she's not certain. Kayura replies that it's fine because in the end, Maria won the gamble.

Also, there's a little bit of an editorial section in the extra books featuring Hata's thoughts on the HayaNagi ending and Hinagiku's last scene. The wording is a bit different, but it's basically the same stuff he mentioned in his backstage blog. I still love how he says it though:

The headline also goes: "The manga may have ended but the story of these two's lives will continue.

Also, for Hayate's future, he starts a business using his mad hosting skillz or somethin to that effect. Nagi became a popular girl in school coz she's pretty, cute, athletic, and kind. Hata describes her as the rich ojou-sama who became an ordinary girl. Also, she didn't give up on her mangaka dream -- although she's a lot more realistic now. Seems she won an award or somethin for her manga too. Yay~

Finally, on the cardboard cover behind the glossy outer covering of vol. 52, there's a HayaNagi doodle with Hayate asking Nagi if they should kiss since it's the finale. To which, Nagi could only reply with a "hah?" Also, they're both blusing... cute~
Well, with that said, I leave you with this Hayate Reflection by Mellhurst:

Mellhurst's Portion Starts After This Heading

To me, the story of HnG became about Nagi.

Not because that’s how I started reading it. Initially I cared most for Hayate.
No, it was rather because I am much like Nagi. As a friend of mine said, many of us who would read a manga consistently for years and years would likely share many of Nagi’s traits.

She is kind and talented, but fickle, with low impulse controls. A pretty little darling with a poor temper and a fiery heart.

Like many of us, she struggles in life. In her case it would be because her mother decided to have a child, knowing she’d only live till her 30s, and then her first personal butler abandoned her.

Then she outgrew her foster mother, who considered her an adult at the age of 14, and left to pursue her own life.

Thankfully,Hayate came into her life. She saved his life because she could. He in turn repaid it with endless devotion.

Much like every central character in HnG, Hayate was looking for a place to belong and people to love. Cast out of the Garden Palace after a misunderstanding he was unable to further serve Athena. For that matter, could he really rely on his brother in the end? The lifeguard who made it clear he would put the ideals of protecting the weak ahead of Hayate, even if he was his brother?

To Hayate, his relationship with Nagi was always one of love. Not Eros, but Agape. Like most forms of love it began with a transaction, he loved her because Nagi cared for him, but it quickly became his guiding principle in life. Athena taught him, both in practice and in theory that a man was to protect a woman with his life and provide for her financially. Hayate’s expression of love for Nagi was absolute in that he would sacrifice his life for her, because she was the second person in his life to care for him beyond anything else.

He would eventually also fall into Eros with her, but Hayate had been in limerence with Nagi since the very first time she paid for him in cold, hard cash.
Nagi on the other hand fell for Hayate at first sight, the connection deepening as he took a car to the head for her. Yet her feelings needed time to grow. But every time her love wavered, she reaffirmed it, giving up her wealth in Greece when she crushed the stone. She finally decided to trust fully in Hayate’s feelings during the Level 5 school trip, giving up emotionally on the debt that bound them. In the end he became the single guiding point of her life as she fell into despair upon learning that she might not be able to spend her whole life with him and share everything. Yet when Hayate reaffirmed his devotion to her she was quickly ready to return with him.

The romantic comedy, the delightful romcom that was the bread and butter of Hayate the Combat Butler, was in the end a coda. It was a romance all along.

Lordcloudx here again. Here's this week's fanart. Got another reply from Hata-senpai for these. Always, happy to get noticed by senpai~
With that said, see you next week~

Posted by lordcloudx at 9:10 AM