Hayate The Combat Butler Penultimate Chapter: When You Wish Upon A Star -- Review and Synopsis 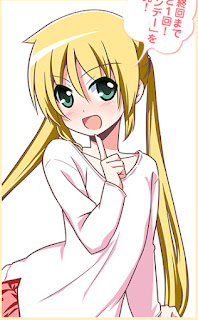 Synopsis:  Nagi is dismayed and thinks that she'll never meet Hayate again. Mikado and his monitors confirm that the Royal Garden is gone. Hayate might not have escaped. Nagi screams Hayate's name and he falls down next to her after the third call. Mikoto Tachibana comes in to explain that it was because of the strongest bond between them and Nagi calling out his name allowing him to cross over the past and the future like a gust of wind -- as told to her by someone who once made a wish.

After a brief hug between Hayate and Nagi and Athena declaring it's a happy ending, Hisui attacks from out of nowhere. Nagi says she has something to do with Hayate, so she gives Hisui the loto key. Hisui is satisfied with this and invites Nagi to eat some cake together sometime. Athena and company also disperse leaving Hayate and Nagi to talk.

Nagi declares that she no longer needs her wealth, power and anything else given to her by someone else. She's decided to be her own person without relying on someone else's strength. With that she fires Hayate and tells him that she no longer needs him for protection, support, and that it's fine if he didn't love her. She says that this one year of misunderstandings wasn't bad at all. With this, Hayate, gets up and says he is grateful to her and seemingly, he walks away from her. At this point, Nagi is trying to hold back her tears. The chapter ends here.

Review: This is a guest review by Roop Banerjee. This may be the last review on this site... so enjoy.

First of all, thank you lordcloudx. I feel honoured for getting an opportunity to write a review on this chapter​.

Now onto the review.

Nagi just once again made the sacrifice that she had made in chapter 252. And she'll probably do it again. That is​ how intensely she loves Hayate. This chapter shows how much she has evolved as a person and the maturity she has gained. She had let go of Hayate when he told her that he needs to save someone (chapter 253), she was ready to let go of Hayate when she believed that Ruka had won (chapter 427). This time as well, she sacrifices both her inheritance and decides to release Hayate permanently.

However, the struggle is there in her heart. After Maria left, the one thing that made her go on was her undying love for Hayate and her belief that he returns the affection. And when the truth about that Christmas Eve night finally comes out, Nagi loses the one thing that meant everything to her, her hope that Hayate loves her. And therefore, the path is opened.

In the alternate world, Dream Maria is with her as well as Dream Hayate who loves Nagi and expresses his feelings overtly. Dream Maria is not much different from Real Maria. DM differs from RM only in the sense that RM wants to explore the world. Her genius has made her graduate from school too quickly and her potential hasn't been fully recognised as Nagi's maid and within the confines of the Sanzenin estate. Nagi not needing RM's help (chapter 424), Nagi gaining victory over her (chapter 515), made her question her own capabilities and what she really wants. Like Nagi, RM has lived a sheltered life but the former's escalating growth made her want to travel for her own self discovery, which she truly deserves.

In the previous chapter, DM declared to Hayate that she wants a wallet for a birthday present. A wallet as a gift, is a symbol of friendship and wishing the recipient a prosperous future. This is something that, thanks to lordcloudx, came to my notice.

In the Royal garden, Nagi finally calms down after Hayate tells her of the importance that the year had for him, how much he values their moments together and Nagi agrees to return home. She voluntarily loses her inheritance to Hisui and gives Hayate the freedom to choose his own path and to fall in love with whoever he wants. Her actions prove that no matter how much she loves and wants to be with Hayate, his happiness is everything for her at the end of the day. If his happiness means somewhere away from her, then she's ready to do that. Her fortune is nothing in comparison to the immense love that she has for him.

The way she saves Hayate from the Royal garden is spectacular as well. Her scream for the person with whom she shares the strongest bond lets him do the special jump, which he is motivated to do, only for Nagi. The king's jewel indeed is a stone of bonds and Nagi manages to save both herself and hayate with a single stone. A bond involves at least two people and in order to form a strong bond, mutual feelings are needed, it cannot be one sided. It makes me wonder, that if the feeling is love on part of Nagi, what is the feeling on part of Hayate?
Nagi losing her inheritance and letting Hayate go could be taken as another confession but she doesn’t expect anything in return because, she has given up on that hope too. This, however, doesn't make her gain closure as we can see her crying and clenching her fists. She has loved, does love and will probably continue to love Hayate in the future, such a deep impact he and their moments together had on her.

We can see Hayate becoming wide eyed, he bows down and expresses his gratitude. It is quite likely that he feels something more than simple gratitude at the moment but that is curtained by him turning his back towards Nagi. What that feeling is, we can only guess and find out hopefully in the next chapter.

Since we're so close to the end of this manga, there are a few things I need to mention about Hayate regarding his response in certain situations when Nagi is concerned:-

Limerence - this is what I think Hayate feels towards Nagi. Since the day he saw her, he has felt a spontaneous adoration and attachment towards her. Hayate does feel love towards her. In 500 plus chapters, this love has never been declared as romantic love, nor a love for a sister. At least Hayate has never declared what exactly he feels for Nagi. Since he has never shown any overt physical attraction for Nagi, I think he's in a state of limerence as far as Nagi is concerned. It is because of this limerence, that he yearns for Nagi's attention, although he never considered that someone like her could be in love with him.

Their first meeting - Time and again their first meeting has been focussed on. Hayate wanted to kidnap Nagi but immediately showed concern for her when she felt cold. When Nagi said that his coat felt warm, Hayate felt the same in his heart. He has long been deprived of a sincere praise and has always felt that no one needs him. Nagi's need for his coat, his money to buy a drink, and himself, in turn, triggered a need in Hayate to be needed by Nagi. He wants to belong and with Nagi, that need is best satisfied.

Becoming a debt ridden butler - Hayate became a “poverty stricken debt ridden butler” when Nagi paid off the money for him. He became burdened, not just financially but emotionally as well. He was insecure, drawn towards Nagi, and he has himself declared that something felt off about his relationship with Nagi. When the misunderstanding happened, Hayate was already under an emotional burden, for his wrong choice of words made Nagi misunderstand and from then onwards, he has only led her on, although unintentionally. When he paid off the debt in school trip level 5, only the financial debt was cleared. The emotional​ debt, however, remained.

His decision to stay as Nagi's butler -
Hayate decided to stay as Nagi's butler after he paid off his debt. But why? He felt Nagi will be unable to stay on her own. Of course it was also because Hayate really enjoys his life with her. But he always seems to be in a state of panic when Nagi's growth as a person is concerned. Her independence is a potential threat to him, to his position to remain by her side and he becomes frightened upon thinking that a day would come when Nagi would no longer need him.
So when he decided to remain as her butler, one of the main reasons is possibly because of his need for her, rather than her need for him, as he has tried to convince himself many times.

On seeing Nagi's manga about him - Hayate has never felt that he could be the centre of someone's attention, that someone could make him their first priority and with Nagi, his only confidence has been that he is a suitable butler for her. That he could also be someone she truly loves, is beyond what he can imagine. Which is why, when he saw the manga, he was bewildered, but he didn't exactly hate it. He didn't want to confront her about this either and once again, the reasons were vague. It could be that he was being an escapist and didn't want it to be the truth, but then again, who knows? He perhaps didn't want it to be a lie either.

Lies - The way this word was stressed upon when Nagi discovered the misunderstanding is quite noteworthy. Almost like,on their first meeting, when Hayate said that he needs Nagi, was it really only as a hostage? Maybe it was because he was intrigued by Nagi and he needed her to be emotionally available as well. Nagi calling hayate's love for her a lie so many times is a possible hint that it is, in fact, not a lie.

Whom could he die for? A question, the answer of which we all know. Everyone. Whoever needs him, he'll try to save that person. But when the question arises that whom is he WILLING to die for, then without a doubt, that's Nagi. Why? Because he'll have no regrets. Nagi is the one who changed his future, he's now clear of his burdens, both financial and emotional and he got to be with the person who made a 180° change in his destiny. In chapter 566 he said that he has no regrets because after all, he was able to protect her. Maybe he would have had regrets if it was someone other than Nagi, because Nagi is the only person for whom he is willing to make the ultimate sacrifice.

Eagerly awaiting the last chapter. Hoping for the best.

Posted by lordcloudx at 9:48 AM