Hayate The Combat Butler Chapter 565: Final Chapter 17: Who Do You Love? -- Synopsis and Review

Mikado: The Royal Garden has begun to collapse?

Mikado: This is the final stage... if this goes on, even if the path is still kept open with the wedges...

Final Chapter 17: Who Do You Love?

If the royal garden disappears, no one can help the people inside.

Ginka: Isumi, how about the stone?


Sakuya: What are you doin, Hayate nii-yan! Hurry and wake up!

Sakuya: At this rate, this is going to be the end of everything.

Hayate: Even if wake up... it's already too late.

Hayate: I made ojousama cry...

Hayate: Even if I try my best, eventually, I'll lose to the interference of my parents.

Lifesavers Guy: But that's amazing, Hayate. You mean the Yakuza were targetting you on this day?

Hayate: No, I'm not joking.

Lifesavers Guy: But that's ok, you can count on the sea house.

Lifesavers Girl: It's fine, it's true.

Guy: The Yakuza are strong but it's ok

Hayate: is it really ok?

Souya?: But let's do it together. We're friends, right?

Hayate: If meeting ojou-sama leads to such a painful conclusion then this is...

WE MUST STOP DA COLLAPSE OF DA ROYAL GARDEN!

AT THIS RATE, WE'VE ONLY GOT 30 minutes!

Sakuya: In this situation, why won't you wake up?

Mikado: Does he plan to sleep eternally inside the dream world?

Ayumu: That's right, if I had found you on that day, the future would have been different right?

Ayumu: Perhaps, I would have been reflected in your eyes. 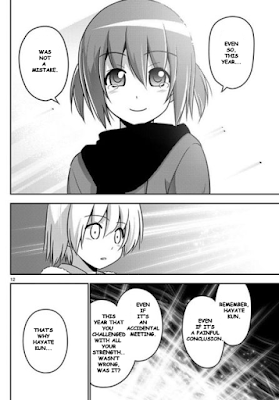 Hayate: Ah, but I have no place to come home to.

Ayumu: If that's so, then come to my house.

Ayumu: My younger brother is there, but it's ok.

Ayumu: I'm sure my mother and father will welcome you!

Ayumu: That's why! COME HOME TOGETHER WITH ME!

Hayate: Why are you doing this for me?

Hayate: I thought this was the worst Christmas Eve of my life. My parents pushed their debt onto me and the Yakuza want my life too.

Hayate: But today... you really saved me.

Hayate: Today, I met the most important person in my life.

Hayate: On this fated Christmas Eve. If Nishizawa-san feels the same way, I'd be really happy.

Ayumu: Those were... the words that I'd been waiting to hear for this past year.

Ayumu: Those words I was supposed to be longing for...

Ayumu: The moment I heard those words... I understood.

Ayumu: Eh? Something as simple as this?

Ayumu: This is so hard... it's right here in front of my hand but..

Ayumu: If he had met another person, it would have been as easy as this?

Ayumu: Then my one year... was really meaningless ---

Ayumu: meaningless? THis one year... really?

Ayumu: Was it really meaningless?

Ayumu: The answer was really that simple, huh?

Ayumu: This is probably wrong, isn't it...

Ayumu: This past year was painful wasn't it?

Ayumu: I always knew this encounter was wrong.

Ayumu: It's a really painful thought.

Ayumu: However... although this encounter may have been wrong...

Ayumu: Even so, this year was not a mistake.

Ayumu: Remember, Hayate-kun. Even if it's a mistaken encounter. This year that you challenged with all your strength wasn't wrong, was it?

Ayumu: Even if someone makes your life hard, don't lose.

Ayumu: Even if it's painful right now, it's not over yet.

Ayumu: Hayate-kun, you can definitely change the future.

Ayumu: In this future, I'll already be gone.

Ayumu: Believe, the Hayate-kun that I fell in love with. And then, rise up again.

Ayumu: Hayate-kun is the coolest in the universe, that's why.

Ayumu: I truly loved you.

Sakuya: We're out of time. The Royal Garden will collapse in ten minutes. When that happens, everything will be lost.

Sakuya: Anyway, the royal power and Nagi... the door is open.

Sakuya: Hayate nii-yan, you have a king's jewel!

Hisui: A mouse crept into my castle!!

Hisui: I haven't fulfilled my purpose yet. Concern for my life comes later!!

Hayate: You need to live fo fulfill your purpose!

Hisui: I have nothing to live for!!

Isumi: You always destroy everything, don't you!!

Isumi: Nagi and the royal power are beyond here. I'll take care of this fool. Go, Hayate-sama!

Hisui: You wanna do it, Isumi!!

Isumi: You really... Truly don't know when to back down do you?

Hayate: But... what kind of face can I show her?

Nagi: If you weren't here Maria would still be...

Nagi: I wish for a world where Hayate loves me.

Hayate: Whatever is said I...


Hayate: Of course, this is because ojou-sama made that wish.

Maria: What's wrong, Hayate-kun? WHat's with that surprised look on your face?

That's all! See ya for the last 3 chapters!

Review: This was definitely an intense chapter, so let's take a few things up.

The Most Solid Evidence for #Team Hayanagi
I think it's pretty obvious here. Hayate said that he liked (suki) Ayumu based on the fact that she saved him from the Yakuza on the worst Christmas Eve of his life. We all know that the reality is that it was Nagi who saved him at that time -- so who is anyone to say that he does not feel the same way about Nagi?

In any case, Ayumu re-affirms what Athena said about herself not being reflected in Hayate's eyes anymore when she mentions that "would it have been me reflected in your eyes?" Obviously, she means that the person that he met on that Christmas Eve is the one reflected in his eyes right now. No need to look deeper than this, really. 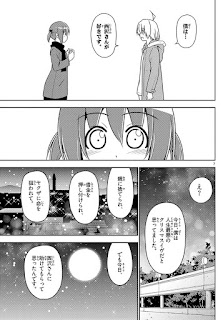 Getting Hisui Out Of The Way

I was a bit apprehensive about this finale given that Hisui had also earned a ticket into the Royal Garden. I was worried that a lot of time would have to be devoted to resolving the battle between Hayate and Hisui. As it turns out, Isumi would be Hisui's final opponent and not Hayate. It's also quite fitting since they're childhood friends and thus have a history together. However Hisui's story is resolved, it would be within her battle with Isumi -- which gets her out of the way so that the core trio of the series can finally tackle the final conflict.

The only thing that is unclear at this point is Hayate's feelings. However, given the setup for this story, I would say it's pretty much a given that the only girl he can fall in love with right now would be Nagi. Maria is out of the question unless Hata desperately wants to write a surprise twist into the story and troll everyone. A Maria end cannot make sense given how the story has been developed.

With that said, we are still unsure as to who Hayate really loves except for the fact that we do know that Nagi is and has always been his number one priority. The question right now would be: has he finally considered her romantically? This should be sufficiently answered within the last three chapters.

I loved the fact that Hayate was again in conflict as to how he would face Nagi, but unlike last time, he's not running away and still running directly into a confrontation with her -- unfortunately, Maria or some fake version of Maria is still in the way.

We'll see how things play out from here, but I'd definitely love a little bit of love-hate conflict between Hayate and Nagi perhaps with a partially Midas-possessed Nagi attacking Hayate but overcoming Midas' influence in the end through the power of love. It's cheesy, it's predictable -- and it's a very satisfying and logical way to wrap things up.

Ayumu's Departure
Ayumu's ship was really doomed to sink. No two ways about it. There would have been too many conflicts with trying to twist the story in her favor -- and even moreso with certain sunken ships whose supporters refuse to move on.

With that said, Ayumu was given a chance to really shine. She got to have Hayate tell her that he likes/loves her and then she even got to kiss Hayate. As expected of Hata's well-rounded characters though, she understands that in the end, these feelings were not really meant for her. She looks absolutely beautiful in that one mugshot panel... although I'm hoping that Nagi gets an even more lovely panel in that style herself.

Maria
Maria herself has some unfinished business -- but mostly with her role in the misunderstanding between Hayate and Nagi. I really don't think that a romantic final conflict with Hayate is in order here. Maria has already shown that she doesn't really "love" Hayate romantically even if she has shown some small degree of attraction for him every now and then. The same is true for Hayate -- and the biggest evidence of this would of course be the fact that he was actually considering trying to get Maria to fall in love with him so he could induce an explosion of negative emotions.

Anyway, Maria's final role will probably center around the misunderstanding and the letter that she left Nagi.

And with everything else out of the way, the stage is set for a beautiful climax featuring the true main characters of this series: Nagi and Hayate. I know that this pairing is hard to swallow for some, but this has been the logical outcome of the story all along. The problem is that a lot of you apply real world standards or your own subjective standards on "love" and "romantic relationships." Like I've said before, "love is basically whatever the author says it is in his own story."

I believe Hata-sensei is set to show us a really beautiful, wholesome conception of love. The fact that it challenges a lot of the ideals that a lot of us have always held onto is one reason why its being met with so much negativity and denial -- especially in the English-speaking fandom.

Fanart Corner: Some new pieces of traditional fanart for you today. I'm really loving watercolors recently. With that said, I think I'll turn at least one of these into digital art for next week... probably the bikini one -- but tell me if you'd prefer I digitize something else. 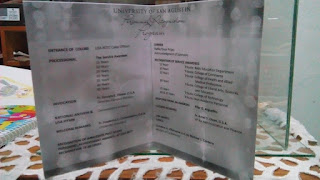 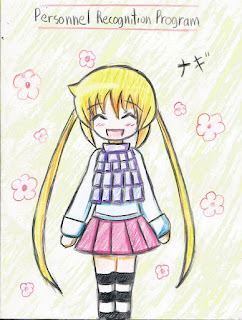 Hata's BS: (before this, he says something about a 54-page color extra --- maybe it's for the next volume's release)

Finally, we're at this point after 12 years, it seems this is the last time I'll be drawing this girl.

Anywayz, at this time.
Let's talk about this week's scene and how it
came to mind.

I was really thinking about a Yakuza escape scene.
Perhaps some help from aniki would come. I was thinking of another meeting scene.

But that sort of scene would be trivial.
It was hard to put together this week's scene.

To have come this far as an author is really a long distance.

These 12 years, 10 times, even a hudndred times long would not be enough to think about this scene.

Honestly, I've had a manuscript for this scene since 12 years ago. It's quite simple.

However. while drawing, the image in my mind was not very strong. and that's why it was suffering.

Frankly, the way I've written this ending well... was it ok?

I thought it over many times. In any case, everyone will get through this happily.

Even so... this is the end for Nishizawa-san.
My manga's character. Whatever you have to say, really, thank you very much.

With that said, there are 3 chapters remaining.

By the way, some anon with a lot of spare time and not a lot of creativity thought it would be funny to copy and paste parts of my review and replace all instances of "Nagi" with "Maria." Check it out.