Synopsis: Ta-dah! You can always rely on lordcloudx fail translations to get it almost but not quite right... on with the transcript:

Chiharu: I seeeee that old house legend is interesting eh?

Nagi: Yearh, but it's only a legend anywayz

Nagi: HOWEVER! After mommy kicked the bucket

Nagi: Some unknown spaz talked to me

Totally Nadja: I can't go back with ya crying, so lemme tell ya the castle's secret~

Someone: Blah blah Nadja's book. Use it and you trade 50 years of your life for a wish and stuff, but it seems I gotta use it without the 50 year lifespan trade-off thing coz the fans dun want to see an old hag Athena.

Hayate: So that means...

Athena: blah blah something about the usage of the king's jewels and the royal power

Athena: (let's see she said something like...) King Midas made it so that the Royal Garden is endless so that he could trade 50 years of his life to use STAR POWER! However...

Nagi: Gotta have a king's jewel to use da POWER or you can't go out of the Royal Garden.
As long as no one comes to help ya, you gonna be FOREVER ALONE!

Nagi: That's why this is a stone of bonds

Whoever wants to help

SHould have proof of love and a strong bond.

Chiharu: Well, you two will be ok, right?

Chiharu: You and Ayasaki-kun coz you're in love with each other!

Chiharu: Ya got that right!

Maria muttering to herself: Somehow... you should go but you can't without the stone, right?

Athena: That person gonna abuse it.

Hayate: We're here but how do we get in?

Hayate: There's a chime, but it would be silly to use it.

Isumi: Yeah, but the residents in there had no qualms about trespassing and robbing the treasure that's in there right now.

Hayate: Yeah, that's true but... the opponent is rather unreasonable this time that's why.... eh?

Isumi: Ah, good evening, Hayate-sama~ quite a coincidence meeting my bad-ass self this time of night eh?

Isumi: Eh, watcha talkin about? It seems that door just decided to be blown away by itself.

Isumi: I just came to meet a friend. What a cheap gate, eh?

Isumi: Anywayz, no time to waste. Time to enter this house. It would be rude to refuse this gate that just decided to open itself.

Isumi: With this, it's fine to enter and rob the treasure~ let's go~

Hayate: WTF is up with zis biyatch?

Athena: Well, Isumi-san is here so it's a good thing, right?

Athena: I brought this along (shows him the Athena power meter) as precaution but now we gotz Isumi...?

Athena: Fudge, she chose this time to get lost?

Some friends came along huh?

Hisui: This stone is really important, it seems.

Hisui: Well, since they came all this way, I'll listen to what they have to say.

Hisui: But bring the thief back in one piece, k?

Hayate: There's no one in here, huh?

Hayate: It's so huge but there's no one around.

Hisui: The king and the victor are also all alone in the world~

Hisui: How've you been doing... whatsyername?

Review: Well, I totally expected a Fumi, Sharna and Shii-chan chapter again this time around, but thankfully Hata proved me wrong. Anywayz, we continue with where we left off in the last chapter.

One interesting development here is Maria overhearing Nagi and Chiharu's conversation. Let's see where she goes with this info... well, things won't be looking good for Nagi for a while. She is totally going to be crying, but it's all good for her in the end. Also, Hayate needs to suffer some as well.

Of course, the most interesting development for me was Hata using some Athena x Ikusa moments while Nagi was explaining stuff about strong bonds and proof of love~
Anywayz, looks like Hisui is going up against Hayate and mini A-tan, but she can apparently use her power for an hour or somethin.

Isumi got herself lost again after blowing up the gate... did she really? I betcha she just went off to have her revenge match with Housen.

So over-all, things are proceeding quickly and all is going according to plan~ See ya next week!

Fanart Corner: This is a reaction pic that you can use for just about anything. I made it specifically for chatting on facebook. 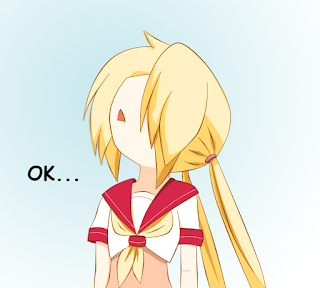 While I'm at it... have a naughty edit spliced together with an old fanart~ 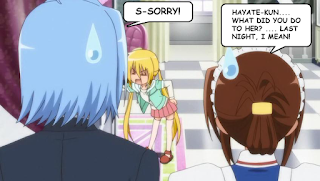 Posted by lordcloudx at 7:56 AM