What If? A Hayate no Gotoku! Alternate Retelling: Chapter 4: I’ll Be Waiting

With superhuman speed, Hayate made a mad dash to save his lady from the clutches of his own parents.

“Hmm…? Do you have something more to say?” Nagi replied matter-of-factly.
“Yes I do! I-I can’t put it into words right now… it’s not the right time, but… please… I do have something to tell you… so, on December 24, at the place where it all began! Please, can I see you again at that time? I’ll wait for you. I’ll wait for you no matter how long it takes!”
“I see…” Nagi scratched her head as if deep in thought, then she turned to face him with a smile.
“Ok, let’s see each other again… so for now, this is goodbye, Hayate.”
“Goodbye, ojou-sama” Hayate bowed his head low. Mercifully, it began to rain on that night, obscuring the tears which were streaming onto his cheeks.
And thus, time moves forward to December 24. Loser Park. Somewhere in Japan.
“The words that I couldn’t say back then. The words that I’m struggling to say right now. They are all the same.” Was what he said.

He was almost as tall as her now. It wasn’t always this way. Just a year ago, she actually towered over him. Right now however, they were almost at eye level.

“The way you looked at me with those kind and lonely eyes. The way you took my hand in yours, I always knew how you truly felt.” Was her reply.

He held the palms of his hands in front of him. Looking a bit hesitant, he continued.

“You never doubted me – even though I could never say things correctly.”

“I was always one step ahead of you, listening for the familiar echoes of your footsteps.”

“I tried so hard to hide these feelings. I never realized that this was my biggest mistake.”
These were his sincerest thoughts at that moment. There was no room for misunderstanding.
Her face felt slightly warm despite the decidedly cold winter breeze. Strangely enough, although it was winter, it was not yet snowing in this particular part of Japan.
“Do you still remember? The first time that we met?” Was her question.
“Of course, how could I forget?”
“I always kinda hoped those days would last forever.”

She looked far into the horizon with a knowing glance. The sun flared with a bright orange glow – the last rays of light before nighttime.

Upon hearing his words, she moved closer. Cupping his chin with her long, delicate fingers, she looked kindly into his deep blue eyes.

“Don’t say that… ok? ‘Sorry’ is a word of regret.”
She looked up into the sky. Hayate could only stand and watch, entranced by her every movement. The way her long golden hair tied up in twin-tails fluttered in the breeze, the way she closed her eyes with her head raised high.

“Listen, Hayate… sorry is a word of regret – so don’t you ever say something like that to me again. To regret means to dwell on the past. What has happened cannot be undone, so even if things seem painful, keep moving forward and never look back.”
“But – I thought you’d hate me if I didn’t say that. I did such a terrible thing.”

He was on the verge of tears.

She changed the subject.
“What?”
“I can’t believe it’s been a year already.  Every day just felt like a wonderful dream.”

Night had fallen. The conditions were perfect.

Hayate took a deep breath. He had asked for this meeting because he wanted to say something to her… but he still needed one final push before he could say it.
“Hey, do you think they were watching over us, ojou-sama?”
“Hmm…?”
“The stars, I mean. Do you remember?”
“Oh yes. You mean when I told you the story of Orihime and Hikoboshi?”

“Yeah, I just feel that everything fell into place perfectly at that moment… like someone was watching over us.”

“Nagi onee-sama… I love you. I’ve always loved you. From the moment that I first saw you, my feelings for you have never changed!”

He had finally said it. The words flowed naturally from his lips. There was no hint of hesitation in his tone. She had told him not to live life with regrets after all – so there would be none from Hayate Ayasaki – even if…

A strong gust of wind blew past just as he had made his confession. Still, there was no doubt that Nagi had heard what he had to say.
She closed her eyes. It was cold, but it wasn’t snowing – just as when they first met. She was wearing a pure white dress that seemed to dance with the wintry breeze as it clung to her petite, feminine figure.

She turned to the side and bowed her head low. A thin smirk formed on her lips. Hayate’s heart was about to jump from his chest in anticipation.

She knew how he felt of course, she had always known.

She looked into his eyes. They were definitely almost at eye-level now. He had grown a lot in just a year. Given one more year – perhaps even a few months time, he would probably be taller than her.
“Hayate, I like you but… I’m not sure if I can tell you the words that you so desperately want to hear right now.”
“I… see.”

“So therefore!” She suddenly raised her voice, which startled Hayate before he could even think of becoming depressed.
“1,117 days. That is the wall of time between us. I want you to prove to me that you can overcome this distance! Become stronger, faster, taller … and break down this invisible barrier, Hayate… become strong enough to endure and overcome any problems that come between us, be it kidnappers, a 156 million yen debt or a bitter misunderstanding... until then…”
She turned to face him. She was smiling – the same smile that she had shown him on this very night just 365 days ago. 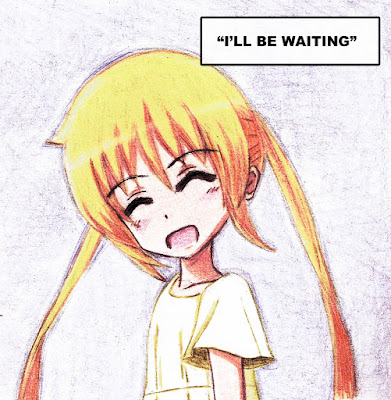 “I will be waiting... at the other side. So grow up fast, Hayate.”
Hayate closed his eyes and clenched his fist with a firm resolve in his heart.

“Definitely! As long as you are waiting for me, Nagi onee-sama, even if the Milky Way itself tries to get in-between us, I will become strong enough to kick a wormhole through reality just to reach you.”

She leaned forward and closed her eyes… and he too closed his eyes in anticipation.

He felt something wet and warm… on his left cheek – which caused his heart to beat wildly.

Hayate might have left the park just a little bit disappointed on this night, but this was much was fine… for now.

It began on Christmas eve on this very spot just one year ago. And on this very same spot, it begins… the story of their love… from this day forth…

Well… this is possibly the longest story I’ve written since the last 4 years or so give or take. I’d like to thank my facebook acquaintance, Bill Plunderbones for urging me on to finish this fic.

Nagi is a very special character for me and I hope you can see that in this fic.
I wrote this story with the intention of making it a stand-alone piece of fiction whether you are familiar with the characters of the manga/anime or not, while still remaining true to the original characters.
The title is a dead giveaway. This is a “what-if” scenario that changes a few things around in their circumstances and most notably reverses the age-gap between Hayate and Nagi. If you feel that Hayate doesn’t act the way he does in the manga in this piece of work, I would argue that this is not exactly the same Hayate from the manga since in this version, he never met Athena and never learned about “the pain of love.” Also, Nagi is older than him in this fic, so even if he has a personal bias against younger women, it wouldn’t really matter in this scenario.

I usually use a show-don't-tell method when I write, but I find that style doesn't work as well for a dialogue and character driven universe like in Hayate the Combat Butler -- so you might find that I'm a bit more direct with my storytelling than usual. That much is intentional.

By the way, regarding the art... this actually just started out as a piece of fanart with a short scenario written for it -- but with Bill's coaxing, it grew into something a little bit larger than that. I actually didn't use digital manipulation that much. The pieces of fanart I'm using here are all drawn with colored pencils and felt-tipped pens.
Anyway, I hope you enjoyed reading this little piece as much as I enjoyed drawing and writing for it. See you in future stories to come. -lordcloudx
Posted by lordcloudx at 6:37 AM