Hayate The Combat Butler: An Accidental Kiss (A short scenario with matching fanart by me)

Author's Ramblings: Well... Hayate is on a two-week break until 6/8, so I've got some stuff scheduled for this blog to fill the gap. One is an article on why I love Nagi Sanzenin so much (as if you needed more of that) and the other is this short scenario I wrote with matching fanart.

I call this a scenario because there's really not enough in here to justify me calling it an actual story. Anyway, not much thought was put into this, but I did try to make it entertaining and as true enough to the series as I can while still being a bit whimsical about it.

Shoutout to someone who wants to be called "Nagi Sanzenin" for giving me the idea for this scenario as well as requesting the fanart that comes with this write-up. 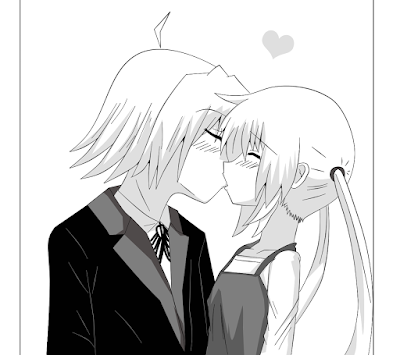 
Nagi: Hayate! Hayate! Where are you?

This was the third time that the young blonde had called out for her butler. Although Nagi Sanzenin was now quite far from the impatient little girl that she had been just over a year ago, she was getting a little bit worried.
After all, Hayate would usually come running on a moment’s notice as soon as he heard his lady calling for him.

Well, the truth is that Hayate had simply overslept because Maria had kept him up all night on a karaoke sing-along marathon with her – encroaching upon Hayate’s already measly time allotted for sleep in a single day.

This time, there was a clear note of worry in Nagi’s voice.

Nagi: Ah, there you are! Oi, oi! Hayate, why are you fumbling around like a drunkard? Watch the stairs, you idiot! Haya...

Hayate: Waaa… out of the way, ojou-sama!

Hayate: M… (Did I bump into something? Such tenderness; and this sweet
scent… wait, wait… is this? What am I doing? Could it be… ojou-sama and I are…?)

Yes, in an epic moment of romantic comedy cliché, Hayate had somehow managed to stumble his way into a deep kiss with his petite young mistress.

Still just half-awake, Hayate's self-imposed psychological safeguards regarding his mistress and her tender age were not yet fully operational and so...

Hayate: (Now that I think about it… such luscious lips... ojou-sama might be small, but she really is a very cute girl. I should stop, but… maybe, just a little bit longer!)

Nagi pushed herself away from Hayate lips and greedily sucked in air. As much as she enjoyed the moment, her butler was already suffocating her with his sudden display of affection. 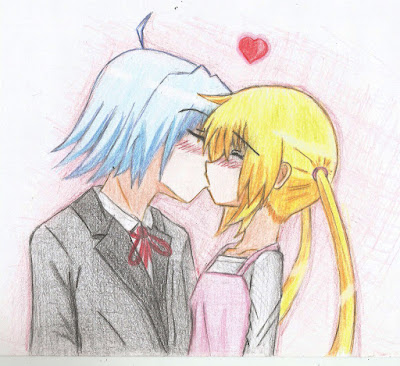 Hayate was now holding her lower body in his arms and hoisting her up to him. The young girl who was quite unaccustomed to kissing anyone at all awkwardly wiped her lips and covered her face in embarrassment.
They looked into each other’s eyes and blushed simultaneously. Nagi was the first to break eye contact. She looked away shyly; face still flushed at the dawning realization of what they had just done.

Hayate, on the other hand, could not take his eyes off of her – drunken with the realization that this young lady before him was a girl – a girl that he could kiss; a girl that he could fall in love with – overcome with happiness at the thought that the most important person in his life right now could also become the love of his life in the near future – or perhaps even sooner. Yes, in his mind, Hayate Ayasaki was getting impatient – even at himself for his own hesitation.

Nagi: Ha-hayate? Th-that was perhaps a little bit forceful, but... If you still want to…

Nagi: One more time. I-I want to try that again. Let’s do it… properly this time, ok?

Hayate stared lovingly into Nagi’s jade green pools. He had cast aside all thoughts of her tender age at that moment. He was looking at her as the woman he could never see her to be for the very first time – and indeed, he liked what he saw very much.

And then he pulled her closer to him. He was not met with even the slightest bit of resistance from her.  She allowed him to lead the way – yes, to be the man that he never had been for her.

Hayate grabbed the back of her head and then greedily sunk his lips into hers – attacking her lips with his own as if wanting to savor every moment that he had wasted looking elsewhere when she had been by his side all this time.

The young couple kissed violently, lustfully, unabashedly – as if to spite the world and tell everyone that what they are feeling; what they are doing at this very moment is not wrong.

Hayate was wild, hasty, strong… and Nagi met him unflinchingly, gently,  lovingly. Yes, after all, she had always been his refuge at the lowest moments of his life, now would certainly not be any different – and yet, now it was very different; now, there were no more words, no more misunderstandings, no more explosion of negative emotions.

Hayate paused in an effort to restrain himself.

Hayate: Ojou-sama? Are you sure about this?

Maria: STAHP! If you go any further, Hayate-kun is going to jail! Mou, kids nowadays! If you’re going to go that far, you’d better make sure you’re going to marry each other. Actually, I could call Grandpa Mikado right now so...

Nagi was quick to take the lead as usual from her faltering butler lover.

A little while later, as Nagi and Maria were alone inside Nagi’s room…

Nagi: Sh-shut up! Don’t talk about it! It’s embarrassing!

And thus, life went on as usual inside the Sanzenin Mansion… although neither Hayate nor Nagi would get any sleep that night after today’s events; so perhaps, something had changed – you decide.