Hayate The Combat Butler Chapter 504: This is a Story of Friendship -- Review and Synopsis

Synopsis: This chapter is basically Kananiwa talking to mikado and revealing how Yukariko, Himegami and everyone else fall into the king's jewel plot. We learn that Yukariko found the stones when she was a little girl and this triggered everything regarding the royal power. Anyway, Kananiwa is using the school trip to find a worthy candidate to open the royal garden. Also Athena was eavesdropping the whole time and thinks something should be done about Kananiwa. Mikado says he's got this. Also, it seems Kananiwa is a relative of Mikado's and possibly a candidate for his inheritance.

Review: Well... ya know, lots of interesting revelations about the King's Jewels plot and all here, but... no Nagi no like for this blogger. But yeah, plot is moving along at a steady clip, so I suppose it's time to speculate on who becomes Kananiwa's candidate?

Well... there are three possibilities the way I see it.

Nagi: Coz she's gonna be so in despair over possibly losing Hayate and stuff.

Hinagiku: I dunno... just insert your favorite rationale here, I 'm sure others can think of this stuff better than me. Anyway, she's apparently important to the plot right now and she's part of the school excursion, so...

Third party interference: Time for Hisui Hatsushiba to come in since she hasn't made a move in a long time and does not appear to be in cahoots with Kananiwa.

Anyway, I dunno... but just lemme say it again: I really like Kananiwa's character for some reason. Sure, not as much as I love Nagi, but yeah...

By the way, I'm totally shipping Mikado x Athena right about now... it's wrong and I know it!
Fanart corner: Man, I am soo lazy to finish my fanart these days. Here are a few. One finished and one unfinished... that is all. See ya next chapter! 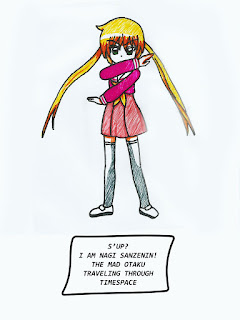 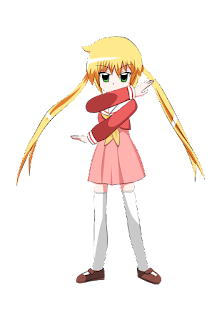 Posted by lordcloudx at 10:10 AM No comments:

Hayate The Combat Butler Chapter 503: The Goblin of Las Vegas -- Review and Synopsis


Synopsis:  Kananiwa and Wataru's mother are havin a little conversation and it seems they know each other... and Kananiwa's here to talk about KING's JEWELS BUSINESS! (meh)

Then we get a totally unrelated page involving Maria... oh wait, it's Hayate dreaming about Maria.

Anyway, he wakes up and finds that it's just Nagi in front of him (Hayate, you poor tasteless fool). Nagi says that it's just the demon of Las Vegas. It's because this manga isn't popular anymore... is it going to be alright? She says that weak-spirited people need to watch out.

Anyway, Nagi breaks the 4th wall for a while, but the gist of it is that Wataru's mother is in Las Vegas. Back to the old hags and their King's Jewels conversation. It seems that they came across the jewel before while they were playing hide and seek as kids in Mykonos. They knew each other well enough to call each other nicknames.

Anyway, Mikoto refuses to tell Kananiwa anything, so she says she'll find out on her own anyway since there's some kind of power in the stone. Kananiwa theorizes that Yukariko probably did get the royal power.
Mikoto insists she doesn't understand but that Kananiwa should stop coz it's all nonsense.

Kananiwa goes "well thanks for fuckin nothing! And says she's going back because she still needs to oversee the school excursion.

Mikoto says that it'd be nice if it all goes well, eh? And reveals that she believes Kananiwa is trying to find a candidate for the royal power through this excursion.

Next page: ZOMG! Mai waifu is so sexy in a bunny girl outfit.
Hayate: WTF are you doing, ojou-sama?

Nagi: Well... it seems the demon of Las Vegas got to me to.

Hayate: Pull yourself together.

Anyway, Hayate remarks that nothing has happened yet and this Las Vegas trip just seems like a tour for being the final phase considering what they had to go through earlier.
Nagi says that maybe the final test has already begun.

Suddenly, a wild Sakuya appears... fuck kansai
Anyway, she sorta says something along the lines of... she's the main character in this final phase.

Nagi: See, Hayate? This girl's been infected with the demon of las vegas.

Review: Oh yeah! This is a 10/10 chapter just for that one-page Nagi service!
Half-kidding aside, not much is really going on for now, but there's some juicy plot-related stuff revealed here -- such as the fact that Kananiwa and Mikoto were childhood friends and that they both knew Yukariko/Nagi's mother.
It seems that Kananiwa has some kind of great wish that she needs the royal power to fulfill. Also, the mention of Yukariko kinda lends credence to the idea that Mikado might be trying to revive her.

Anyway, nothing going on as of yet as far as the students are concerned -- it's a bit strange that Sakuya is here though. It leaves me wondering what her role in this final phase might be.

I'm still liking Kananiwa even if she is being made out to be the villain of this arc. It's also interesting to see her getting flustered when Mikoto reveals that she's aware of her plans.

Also, a little note on this chapter: I'm not sure what the demon/goblin of Las Vegas is all about, but I think it might mean something like, Las Vegas has a certain allure to it that causes you to act er... strangely.

Fanart Corner:  Didn't get to finish this one, but I'll try to get it done by this weekend along with two other fanart in-progress.

Posted by lordcloudx at 5:16 AM No comments: