Sanzen'in Fascination: Why I Believe Nagi Will End Up Romantically Together With Hayate: A Hayate The Combat Butler Essay 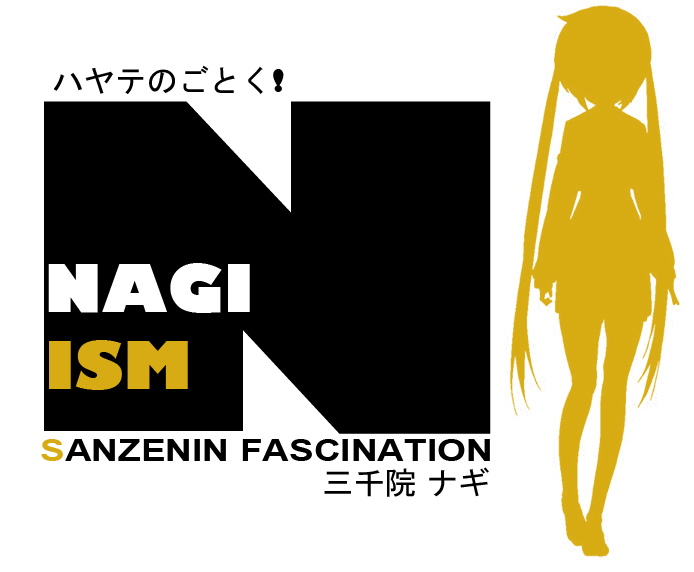 I don’t often talk about Nagi but when I do… WAIT, the premise is a lie and you should know it by now if you’ve been reading this blog often. Not to mention that this is a terribly overused meme. The truth is that I do talk about Nagi and quite often, but it really has been a while since I’ve last written a long article about her. If memory serves me right, the last one was the Athena vs Nagi article and that was written years ago back when the manga was in chapter 413. Now that I feel that we are approaching the home stretch since the manga has finally strayed from the path of Can’t Take My Eyes Off You and relegated it to non-canon, alternate fictional timeline status, I believe that it’s time to do a follow-up article of sorts as to why I believe Hayate should end up with Nagi. 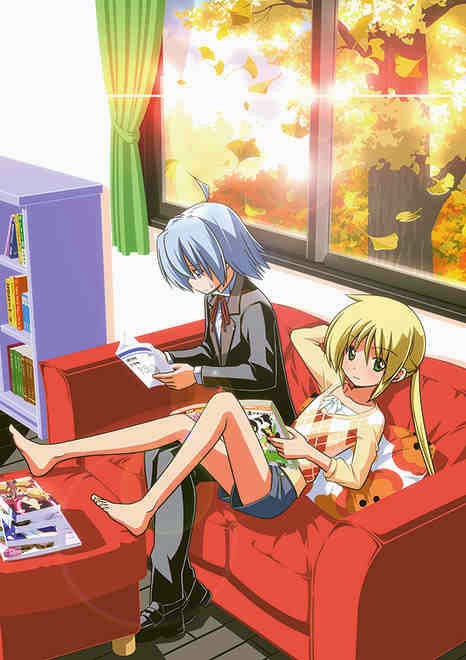 All Roads Point To Nagi

Naturally, this is my personal opinion and I am definitely donning my shipping lens when I make this assertion, but I feel that the natural and logical order of events in the manga as well as the supplementary anime (even Cuties and Can’t Take My Eyes Off You which are effectively non-canon by now) would point to Hayate finally developing feelings for Nagi and thus making her the final ending girl. 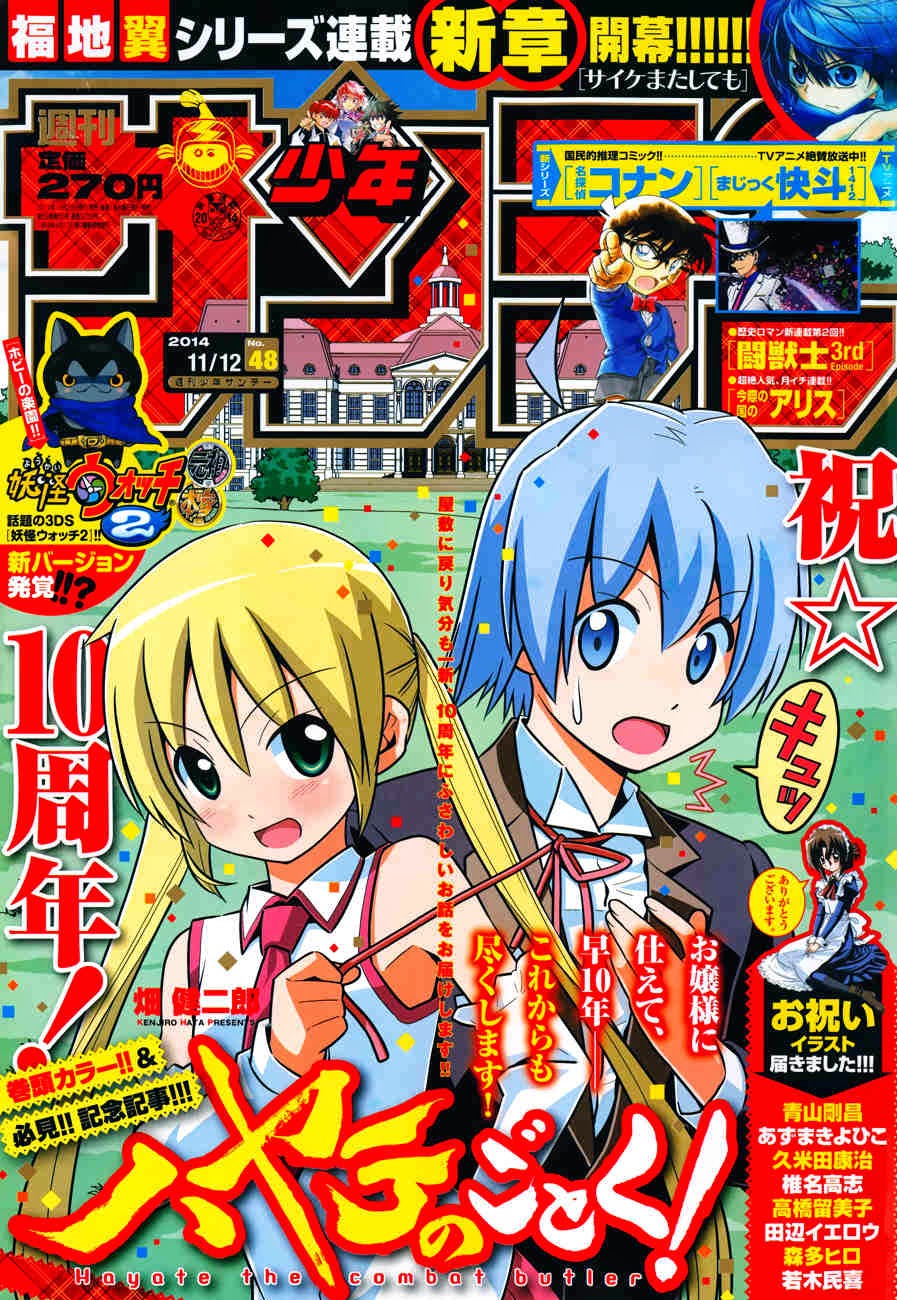 My reasoning hasn’t really strayed from the original one I stated years ago. Simply put, all the significant arcs in this manga imply that Nagi is the ending girl. To point out a few, we have Hayate promising to protect Nagi forever in the Shimoda arc, Hayate promising to protect her whether in the past or future in the Radical Dreamers chapter, Hayate being able to undo a magical amnesia spell of sorts and remember her in Heaven Is A Place On Earth when his own grandmother tried to make him forget about her and replace her with Maria, Nagi breaking the stone for his sake and Hayate being said to have “seen the future” with her words in Athena’s arc – not to mention declaring later on that she is his life.

Of course, the more recent Ikusa arc also ended on a positive note with an implied thumbs-up for the Hayate x Nagi pairing. Furthermore, even though Can’t Take My Eyes Off You and Cuties are effectively non-canon, let’s not forget that for the 10th year anniversary ending of OVA vol. C, there’s a fictional wedding between Hayate and Nagi – yes, it’s probably all in Nagi’s head and yes, the events of the OVA might be non-canon altogether, but wouldn’t you think that the author is trying to tell us something if Hayate always ends up together with Nagi in ALL of the anime adaptations? Furthermore, don't forget that several of the series most iconic songs including Can't Take My Eyes Off You by EYELIS, Ko No Me Kaze by Iku and even Heaven Is A Place On Earth by fripSide seem to arguably ship Hayate x Nagi.

It’s Hard To Justify An Ending Girl Other Than Nagi

Hayate is a really wishy-washy excuse for a man, to be honest. He is physically strong and mentally capable, but when it comes to romance, he still hasn’t moved on from the mindset he had as a six year-old about the “pain of love” that Athena taught him. As a result, he actively tries to avoid relationships because he deems himself as unworthy of a girl’s affection unless he has enough money to support her.

When people say that Hayate is a better match for X girl, I never actively disagree with them. It’s true, if you were Hayate for example, you’d probably think that someone like Hinagiku, Maria, Ayumu, Ruka or Athena is a better match because of “insert reason here.”

Well, here’s the thing, no matter what personal, psychological, logical, sentimental or scientific reasoning you can think of, you need to get past one particular hurdle first and that is: Nagi Sanzenin is the co-main character of this series and you would have to justify an ending where she does not end up getting seriously hurt. 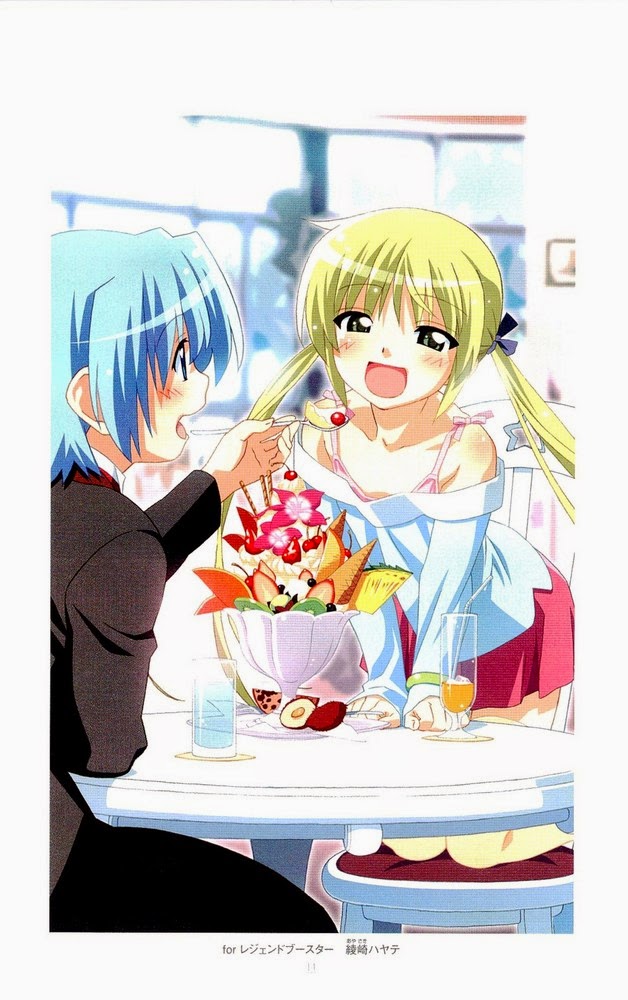 What I think many other shippers fail to understand most of the time is that in order to have Hayate end up with your preferred girl, it’s not about applying real world standards, it’s simply about justifying said ending in the context of the story.

If he ends up with Maria for example, the three of them could indeed stay together and act as a family, but given how strong Nagi’s feelings are for Hayate as a man and not as a father figure, do you really think that she would be happy or even satisfied with this setup? Perhaps Hata could play it off for comedic purposes, but the long-term implication will always be that Nagi would end up unhappy. Face it, as much as you want it to happen, she is not going to “grow out of love” with Hayate unless Hata pulls a deus ex machine on us and makes sudden last-minute developments in the manga allowing for such an ending to happen – but if it does, then it would be going against all the developments (AND I’M NOT SAYING ROMANTIC DEVELOPMENTS! So don’t even think about using this statement as leverage against my assertions because that’s plain annoying) in the plot so far that subtly imply a Nagi ending.

Naturally, what applies for Maria applies for all the other girls in Hayate’s harem as well. Nagi just would not be truly happy unless she ends up together with Hayate as his official romantic partner. If you haven’t figured this out yet after reading hundreds and hundreds of chapters of this manga, then we have nothing to discuss… and of course, an ending with Nagi ending up unhappy just wouldn’t work for this series.

Just to make things nice and clear: Can you really imagine an ending with the main heroine having her heart broken and becoming emotionally scarred for life?

Well… you’re right on all counts, but this is not really a point against the Hayate x Nagi pair. Again, it would be a huge blow against the Nagi ending if we were applying real world standards here, but in the context of the story (and this is my opinion), it actually works in favor of the Hayate x Nagi ending because Hayate hasn’t shown any real feelings of romantic interest towards Nagi… yet.
What we are sure of however is that Nagi is definitely in love with Hayate in a romantic way and with everything that she has been doing so far just to get him to notice her, it would be a terrible ending and a horrible waste of time if he does not at least notice her as a girl at some point. Therefore, the fact that Hayate hasn’t shown any romantic feelings for Nagi yet, but has shown interest in all the other girls in his harem is actually great news for Nagi shippers like myself.

Naturally, you could argue that there are other girls who deserve him more and who have done much more for him. It’s hard to be objective about this point of conflict of course, so I won’t even try to defend Nagi here except that I will say that in my opinion, Nagi stands on a more or less equal footing with whichever girl you think deserves Hayate more.

Finally, as some food for thought on this particular subtopic, I’d like to ask: why are people so quick to assume that just because Hayate hasn’t shown any romantic feelings for Nagi that he wouldn’t be happy if he did become romantically involved with her? Again, the problem here is applying real-life standards to a fictional and rather idealized story. It's really easy to justify Hayate eventually developing or even having already developed feelings for Nagi and just actively suppressing it... of course, if you ship another girl, you'll probably deny this to death, won't you?

Again, this goes back to how many shippers believe that other girls would be a much better match for Hayate. Looking at their respective characters as shown in the manga however, Hayate and Nagi are definitely not a bad match for each other. In fact, you could even say they were made for each other in certain ways. Let’s go over these:
1.   The Age Difference Between Them Is Perfect
Yes, you could say that Nagi is too young for Hayate right now, but look at it this way, Romeo and Juliet, widely considered by many to be an exemplary love story have characters who are the same age as Hayate and Nagi.

Even if you were to apply real world standards, which I won’t, you’ll find that 2.3 to 3 years is the ideal or preferred age gap between dating couples. Again, I’m just using that as an example that they’re not a bad match for each other.

2.   Even Their Names Are Compatible

How about their names? Windless calm and gust of wind seem like they were made for each other for me. 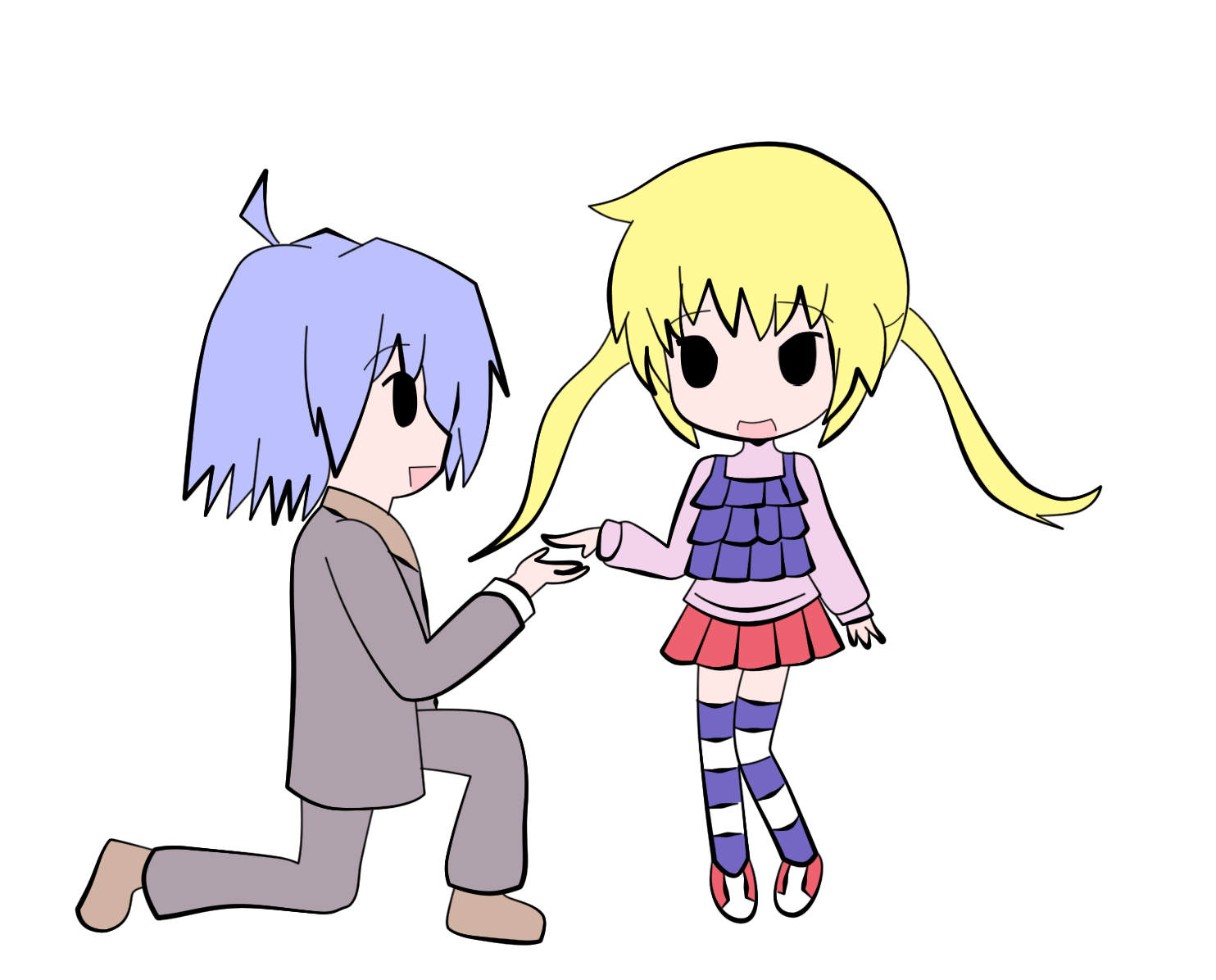 Finally, let’s not forget that Hayate’s defining characteristic is that he is extremely unlucky. Guess what? Nagi has been stated in the manga before to be extremely lucky. In fact, Hayate himself admits that “she has amazing luck of the draw.”

So Why Hasn’t Hayate Shown Any Interest In Nagi Yet?

Very simply… because Hata wants to keep the other ships afloat for as long as possible – they help to keep his manga profitable, after all. Unlike other series like Zero no Tsukaima wherein the hero and the heroine were basically officially a couple long before the ending, the ships have become so integral to keeping Hayate No Gotoku! Alive and profitable that I believe Hata is very reluctant to have Hayate show any concrete romantic feelings for Nagi before the manga is ready to really end.

This way, he can keep stringing along all the shippers and keep everyone guessing until the very end. He will of course lose some impatient followers this way, but I believe the die-hard shippers (myself from the Nagi ship included) would keep following his manga to the bitter end just to see if they’re proven right or wrong in the end.

Right now, if Hayate were to even show the slightest hint of romantic interest in Nagi, then all other ships would be sunk – and that’s not a good thing for Hata’s manga.

Anyway, no matter what happens I’m in this for the long-run and if you’re a die-hard shipper whether you’re on my team or not, I invite you to see it through with me to the bitter end. Let’s discuss, argue, talk about why our waifus are better than each other’s and then let’s all have a good laugh in the end when Hata trolls us with a totally shocking conclusion. (We can kill him later)

Lastly, lest you all forget, this series is not complete without Nagi as the co-main character. As much as the story is about Hayate, it is also about Nagi. Being the titular "combat butler" means that Hayate is fighting to protect someone -- and that someone happens to be Nagi. In short, her role will always be integral to this series from start to finish -- whether Hayate finally succeeds in paying off his literal and moral debt to her or not. (thanks to Lucas Kits for this point and for the fun discussions from a fellow Nagi shipper.)