Hayate The Combat Butler Chapter 441: Talking About Liking Octopuses On Sunday Reminds You Of Mendou-Kun, Doesn't It? -- Review and Synopsis

Synopsis:  Just as predicted, the mysterious person from the previous chapter wasn’t who almost everyone expected it to be. It’s actually 8 (you haven’t forgotten about this sometimes homicidal bucket of bolts who is in love with Makimura-sensei have you?) and he wants the octopus because without it, he can’t marry Makimura-sensei for some reason. He attacks Hayate in an attempt to get the octopus but refuses to tell him exactly why he needs said octopus. Hayate dodges his attacks and then simply hands the octopus over to him.

Anywayz, “mysterious beauty” suddenly appears behind Hayate asking him why he gave away the octopus. Hayate is totally confused as he’s never even met this girl before. She then walks away with the cryptic message that if he doesn’t understand the sin he’s committed, then the ocean will never give him anything.
Hayate reports back to Nagi and company afterwards and tells her what happened. Alice chimes in and says that perhaps his “sin” was in giving away the octopus when it never belong to him in the first place when he had no idea what would happen to it. Nagi reasons out that it’s just an octopus, but Alice says that the woman cared about the octopus and it’s a lovely attitude.

Hayate is flustered and says that he would be right back. Hamster rushes after Hayate and Alice seems satisfied by his reaction while Nagi is all “meh.”
Hayate rushes off after 8 who is about to hand over the octopus to some fisherman with a boat full of em. Hayate asks what they’re doing with all these octopuses and states that he won’t let 8 leave. Suddenly, 8 attacks him seriously from out of nowhere and sends him flying back. 8 declares that he would never understand because he’s so popular with girls and that there’s a special octopus that he’s looking for no matter what he has to sacrifice.

8 then continues the attack and Hayate feels that he’s cornered and done for, but “mysterious beauty” appears from out of nowhere and effortlessly blocks 8’s punch with one hand. She calls 8 an “enemy of the sea” and proclaims that she is the one who fights for the peace of even a single octopus.
Poof! WTF, it’s Ikusa! Well, he doesn’t say that outright, but he takes off the disguise and reveals himself to be a “lifesaver.” Hayate is like “WTF” … just like me.

Review:  Bwahaha! Hata is such a magnificent bastard. I have to admit, I never saw that big reveal coming about the “mysterious beauty” being Ikusa until the last few panels of this particular chapter.  On the other hand, Kyle Lee from mangahere totally called it. Here’s a screenshot to prove it and you can visit this link to the actual comment to confirm this.
I have absolutely no idea where the plot is heading from here, but at least the story is still steadily moving forward and it was nice to see 8 in action again. I don’t have too many thoughts about this chapter in particular, so let’s move on to some random speculations, shall we? Some of these are quite logical, while a few are pretty off the wall. Let’s wait and see how many of these predictions of mine actually come true. At the very least, I was right about the mysterious person from the previous chapter not being Ikusa.

Also, Astronerdboy mentioned that the octopuses might be an Urusei Yatsura reference (I’m familiar with the series since it was shown in the early 2000s on Animax), and we have confirmation of that with the mention of Mendou in the chapter’s title. 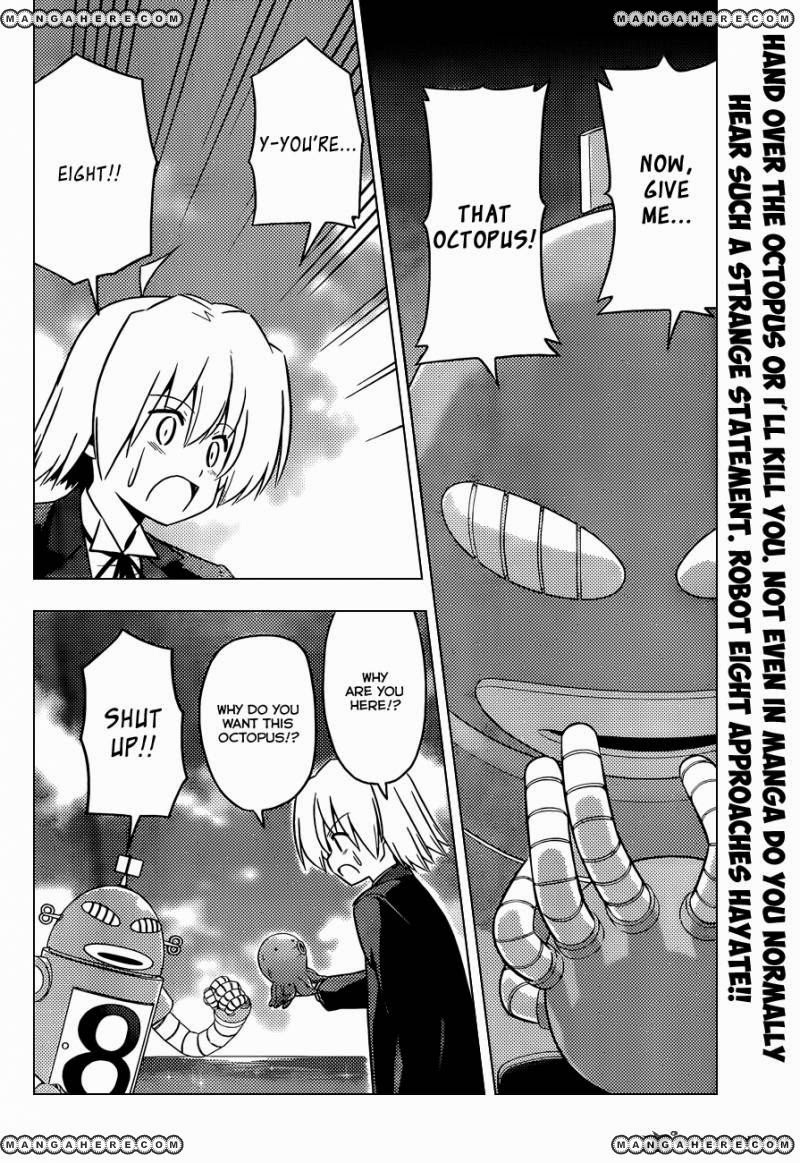 As a side comment, for being a combat butler, Hayate’s really gone down hard on the tier list. He’s probably tied with or a bit better than Hina at hand to hand, but not with her two swords. I think Athena can still pwn him in a swordfight... but full-grown Athena is pretty much OP anyway. He can’t beat Housen on his own and now it’s been shown that even 8 can beat him up. What next? Gilbert can beat him when he's serious? Of course, perhaps this changes when he senses that Nagi is in danger.

10 year celebration project is the finale of this series

If you can recall from the previous chapter, there was a small announcement that there would be a 10th year anniversary project and no, it’s not the daily calendar that comes with volume 40 of this manga. In any case, MadMac, among others, has speculated that it might be a new anime and I’m inclined to agree. As to the subject matter of the anime however, given all that’s been happening in the manga so far and Hata’s seeming penchant for “flash forwards” via anime, I’d say that if it is a new anime, then it might be the finale of this series. Why do I say this? Well, there are several reasons that I can think of:

Wait, hear me out first! Okay, what do we know about Maria so far? All we know is that she’s Nagi’s maid, she was the smartest student to have ever gone through Hakuo Academy, and that she is apparently “17 years old,” even though her mature appearance suggests otherwise. Now we can confirm through Makimura-sensei as well as Yukiji that Maria was once a student at Hakuo Academy, but that’s all that we really know. How can we be sure that she really is “17 years old” as she claims since she doesn’t even know her own birthday? What if she is really a much older, wiser version of Nagi? After all, they’re both pretty smart and Maria is actually relatively short given her age. That’s right, folks! Maria is future Nagi and she has been summoned to the past in order to prevent present-day Nagi from making a decision that she will regret somewhere down the line to become an hero!

Mikado is trying to revive Yukariko

Which is what he’s been planning with the King’s Jewels from the very beginning. Maybe the jewels act like some kind of reality altering device that grants a single wish when all of them are gathered together inside the Royal Garden.  After all, it’s been established that Yukariko was very special to him. Why do I say this? Why… because Hata’s made some Fate/Stay Night references in this manga before, of course! Remember Nagi dressing up as Caster and then getting scared of herself in the mirror? No? Lurk MOAR J00!

Hayate will inherit the Sanzen’in Fortune

And this will finally allow him to pay off his debt and leave Nagi for Athena marry Nagi. He’s already fulfilled the original condition set forth by Mikado when he (as Shin Hayek) made Nagi cry and apologize when he said that he resigned as her butler. Of course, this assumes that Hayate is even eligible for the inheritance in the first place… oh well, not all theories can be fool-proof.

Well, that’s all I can think of for now. I might add some more later if I remember something else. Let me know what you think.
Posted by lordcloudx at 6:10 AM