The tourney is really heating up now. Here are the results of the 2nd round. As always, you can view the more frequently updated match-ups list via google docs here: https://docs.google.com/spreadsheet/ccc?key=0AvGODIgBgBlWdEVNcm5aTlpBZ3Q2SGNwalRUTUljRVE&hl=en_US#gid=0

00Raiser vs GJW: (Match pending. GJW seems to be missing in action for this tourney)

Congratulations to the winners!

Posted by lordcloudx at 8:04 AM No comments:

Hey guyz! Just bought the latest USB arcade stick from CD-R King, the PU701 model. Haven't had time to really try the stick out yet, but it feels quite solid so far. At 780 PHP, (around 18-19 USD) it's quite a bargain for you l337 fighting game enthusiasts out there. Let's get to the actual unboxing! 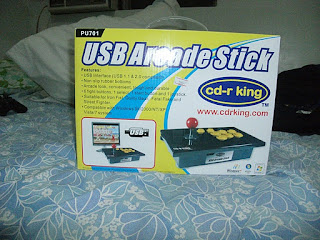 Gotta tell ya, the games referenced on the box make me laugh. The game on the actual screenshot is Street Fighter II which, as far as I know, is only playable on the PC via emulator. I'm not sure, but maybe this stick is also PS3 compatible since CD-R King's older arcade stick certainly was. The box mentions games such as Iron Fist and Fatal/Fake. I suppose Iron Fist refers to Tekken and if you're into doujin games, you're probably aware of Fatal/Fake as well. It just seems funny how CD-R King seems to actually expect casual players to use it for games like Fatal/Fake. You'd think they'd use Streetfighter IV and Blazblue as more conventional examples. Anyway, moving on... 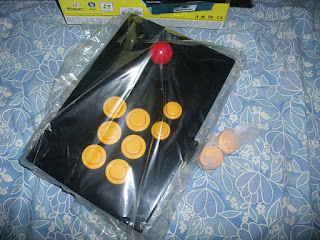 Here's the actual joystick now. It might look smaller than it really is because you have no frame of reference at this point. The two yellow things next to it are extra buttons. It seems the stick is easily moddable so you hardcore arcade junkies can replace the default buttons with *gasp* SANWA partz! 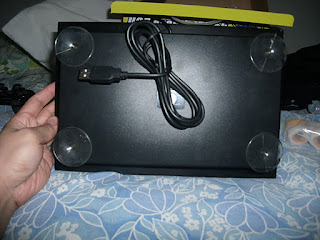 The box said that the stick has "non-slip rubber bottoms." As you can see here, they're actually four suction cups attached directly to the bottom of the stick. They stick quite well on any smooth surface. They even got stuck by accident on the glossy cover of the PU701's own box. The stick is all black, btw. The white that you see at the center is from the camera flash. 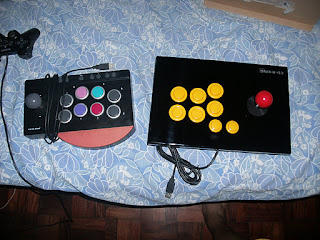 Since I mentioned that you didn't have a frame of reference for the actual size of the Arcade Stick earlier, here it is next to my older CD-R King stick and a PS2 controller in the background. As you can see, it's quite a bit larger considering that the older stick wasn't even small in the first place.

Over-all, the stick feels much more solid than my older one. You can't pull on the joystick like you could with the older CD-R King stick and the buttons feel much more responsive on the PU701. Here's a little gameplay test of the arcade stick with Streetfighter Alpha 3. I don't really use E. Honda that much, but charge characters are awesome for cheesy play :P.

Click for J-List
Posted by lordcloudx at 11:06 PM 9 comments:

Should've added this update earlier, but I really didn't have the time this week. In any case, here's the 4th part of my playthrough of Power Rangers: The Movie for the Sega Game Gear. Going with the Red Ranger this time. Yes, I just realized that the Red Ranger was already Rocky in the Movie, but as you can see by the portrait in the game, it's clearly Jason... right?
Posted by lordcloudx at 10:46 PM No comments:


The third part of my playthrough of MMPR: The Movie for the Sega Game Gear. I'm taking on the Jaws of Destruction using Kimberly/the Pink Ranger this time. She uses a bow as her weapon of choice and plays a lot like Chun Li with a lot of long-range kicks as well as fast, short-range moves.
Posted by lordcloudx at 10:06 AM No comments:


The second part of my review/playthrough of Mighty Morphin Power Rangers: The Movie for the Sega Game Gear. Today, I'm taking on Goldar using the Black Ranger.
Posted by lordcloudx at 11:26 PM No comments:

I’ve decided to do some “Let’s Play” videos of obscure but good games that also double as game reviews. This time, I’m going to be reviewing and playing through Mighty Morphin Power Rangers: The Movie for the Sega Game Gear. Played this game to death back when the Game Gear was the only video game console I had. This game had some of the most fluid controls for a handheld game back in the day and it’s still pretty good even by GBA standards. This is the first of a series of videos that I’ll be doing on the game.
Posted by lordcloudx at 11:10 AM No comments:


Round 1 of the Teacup Invitational SWR Tourney is officially over now, which means Round 2 can begin. Summaries of the results:

Congratulations to the winners and good luck in the succeeding rounds!

Posted by lordcloudx at 7:04 AM No comments: